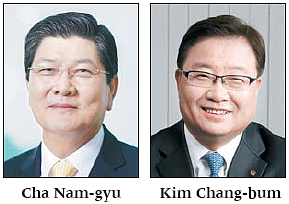 Hanwha Group announced the results of its CEO-level executive reshuffle on Friday.

A number of executives from Hanwha’s top advisory body were promoted. The group let go of its tradition of only promoting from within, adding executives scouted from outside companies like Samsung Electronics.

The group has been operating an advisory body, a central mediating unit that holds discussions on key agenda items for the group and mediates interests between various affiliates since April 2013.

They have been recognized for their work on the council, with Kim securing a future growth engine for the chemical unit and Cha aiding the financial management of the group and also fostering the futuristic fintech business in Hanwha.

Of the four, Ok Kyeong-seok, who served as a CEO-level executive from Hanwha Engineering & Construction, was promoted to chief executive of Hanwha’s explosives division. Ok was scouted from Samsung Electronics with expertise in business management last year. Park Youn-sik, who was promoted as chief executive and CEO of Hanwha General Insurance, also built his career outside at consulting firm PricewaterhouseCoopers and Dongbu Insurance.