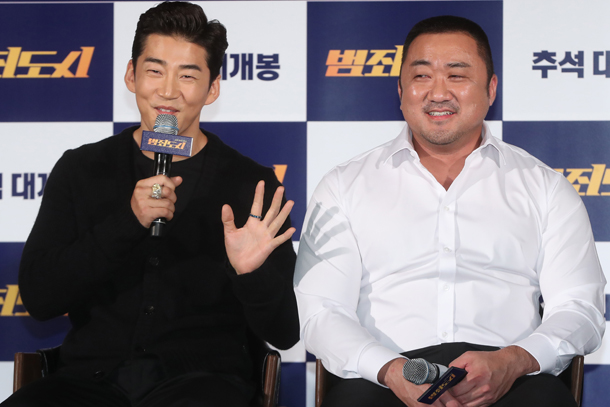 Recently released movie “The Outlaws” was leaked online immediately after it appeared on IPTV and VOD services Thursday. The film’s production companies requested a police investigation on Friday.

Hong Film and B. A. Entertainment, released a statement on Friday saying, “Beginning Thursday, when the paid download services became available, the full movie was uploaded on Facebook and illegal download sites. We worked hard to take the movie down, but it seems difficult to stop them.”

“For the sake of the audience who paid to watch the movie, we must take legal action to those who uploaded the movie [illegally],” added the firms.

Starring actors Yoon Kye-sang (left) and Ma Dong-seok (right), the movie has sold more than 6.7 million tickets in theaters since it premiered on Oct. 3.

Other movies that premiered this year such as “Real” and “Midnight Runners” also saw damage from illegal downloads. Illegal copies of “Okja,” directed by Bong Joon-ho, were also uploaded on pirate websites on its first day of distribution on Netflix. Yet, only the production company of “Midnight Runners” took legal action, and investigations are still on-going.