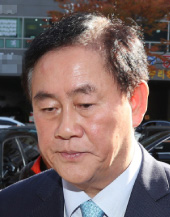 Rep. Choi Kyung-hwan of the Liberty Korea Party, one of the key political associates of former President Park Geun-hye, is being investigated by the prosecution for having possibly received money from the National Intelligence Service.

Sources from the Seoul Central District Prosecutors Office said Choi received about 100 million won ($91,033) from the spy agency in late 2014 while serving as deputy economic prime minister and finance minister for the Park administration. The prosecution has obtained a testimony about the deal from Lee Heon-su, former strategy and coordination director of the NIS, sources told the JoongAng Ilbo.

The prosecution is investigating whether the money was given to Choi in return for his influence over budget planning of major government offices including the NIS.

Choi, a four-term lawmaker, is a key member of a political faction loyal to Park. He served as a floor leader of the Saenuri Party, the predecessor of the Liberty Korea Party, in 2013 and 2014. From July 2014 to January 2016, he served as the economic deputy prime minister of the Park administration.

After leaving the Park cabinet, Choi continued to demonstrate his power over the party, particularly over the nomination process of candidates in Daegu and North Gyeongsang constituencies to back Park loyalists.

“The charge is groundless,” a Choi associate told the JoongAng Ilbo.

“I have never received the money,” Choi was quoted as saying by the Chosun Ilbo. “If it is true, I will disembowel myself.”

The 100 million won Choi allegedly received is separate from the secret funds the NIS had diverted to the Blue House, the prosecution said. Prosecutors have been investigating NIS chiefs of the Park government for having diverted money from the agency’s special expenses accounts to the Blue House from 2013 to 2016. About 4 billion won in total was offered, the prosecution has said.

Three former NIS chiefs - Nam Jae-joon, Lee Byung-kee and Lee Byung-ho - are under investigation, and the Seoul Central District Court issued warrants to the prosecution to detain Nam and Lee Byung-kee on Friday. Lee Byung-ho, however, was released as the court rejected the warrant request.

The court said the prosecution proved that detentions are necessary for the two former chiefs because there are probable causes and risk of evidence destruction.

The court, however, said it did not see enough ground to detain Lee Byung-ho, citing the progress in the investigation.

Lee Byung-ho had been cooperative with the prosecution throughout the probe. He admitted that Park had made a direct order to him to transfer the funds during the warrant hearing.

The prosecution accused Nam of starting the monthly transfer of the NIS money to the Blue House in 2013. He was also accused of pressuring conglomerates to offer 2.6 billion won to the government-backed protests by conservative groups.

Lee Byung-kee was accused of raising the 50 million monthly transfer to 100 million won when he was heading the NIS.

Lee Byung-ho was accused of sending the monthly payment to the Blue House and using another 500 million won of the NIS money for a public opinion survey for the Blue House before the 2016 general elections.

The prosecution may soon question the former president. Park is currently undergoing a criminal trial for receiving bribes from conglomerates while she was in office.

The prosecutors are likely to visit her at the detention center for the questioning.