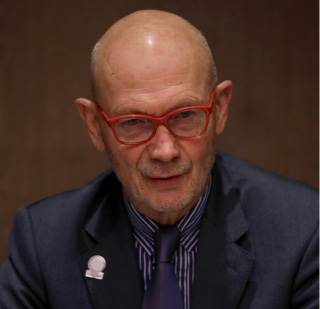 Have no fear of terrorist threats in Paris, said Pascal Lamy, former director general of the World Trade Organization (WTO) and interministerial delegate in charge of the French bid to host the 2025 World Expo, during his visit to Seoul on Friday to promote the French bid.

“Paris is hosting the Rugby World Cup in 2023 and the Summer Olympics in 2024 - this shows that the world has acknowledged and trusts the level of safety in France,” Lamy said in answer to a reporter’s question on whether visitors to Paris, should it successfully win the bid to host the Expo, should fear any terrorist threats.

“Take the Olympics, for example,” he said in the press conference at the Millennium Seoul Hilton in central Seoul. “The Olympic Games require much stronger security in the area, as the events are held in different locations at the same time. France will have some 60,000 security personnel ready for the event. So if we host the World Expo, Paris will be hosting it after securing safety in the area.”

Lamy expects the 2025 World Expo will draw in some 40 million visitors, if the bid is successful. The vote for host country takes place next year, when member countries of the Bureau International des Expositions vote for it in their general assembly.

Bidding members other than France are Japan (Osaka), Russia (Yekaterinburg) and Azerbaijan (Baku).

“France and Korea are similar in that they both pursue advancements in technology and science, but at the same time value sustainable growth and protection of our planet,” Lamy said. “I could tell by looking through how Daejeon hosted the World Expo in 1993 that Korea has been interested in sustainable development for a while now.”

Lamy said that the Expo structures will be built with environment-friendly materials, and that in order to make them sustainable, France may transform the structures into a university campus after the conclusion of the Expo.

“The space could be used as a 21st century university campus,” he said, “by turning the whole place into a campus and the structures into classrooms and other facilities for the students to learn about the Internet of Things and other high technology. In this case, the university will be called the ‘Globe.’ It will be the next Eiffel Tower of Paris.”

The Eiffel Tower was the symbol of the World Expo in Paris in 1889.

Lamy, who headed the WTO from 2005 to 2013, said the protectionism of U.S. President Donald Trump does not worry him too much.

“Trump talks of protectionism, but not all of his talks get translated into policies,” Lamy said. “Bear in mind that this is my personal opinion. But I do think that the countries who are trying to export to the United States will have a harder time doing so during this administration.”