Hu Kwang, founder of hangung, received the Pioneer of Sports for All award during the closing ceremony of the 25th Tafisa World Congress Seoul 2017, held at the Floating Island in Seoul on Saturday. Korea’s newest traditional sport has had its global competitiveness recognized. 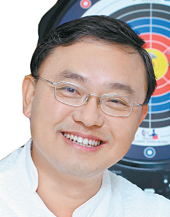 The award is given out to a recipient who has put a high level of contribution in sports for all regionally, domestically and nationally. As the founder of hangung, Hu created the popular sport and was recognized for globalizing it.

Among the member organizaions of The Association For International Sports For All (Tafisa), hangung is the only Korean sport and has expanded globally like taekwondo.

Hangung, or hand archery, is a mixture of tuho, or pitch-pot, Western archery and Korean archery. Games are played in a similar format to darts. Unlike darts, hangung uses a magnetic board and magnet-tipped arrows. The winner is determined by the total points after the arrows are thrown ten times, five with the left hand and five with the right hand. By using both hands, the sport allows individuals to practice flexibility and balance.

Since the game was first introduced in 2009, hangung has now developed into a popular sport with more than a million people playing the game. As more than 300 games are played each year, there are about 6,000 active referees and 200 coaches.

“I’ll develop hangung as a global sport for all,” Hu said. “I believe that the popularization of hangung will widen the communication between generations, age groups, class and districts.”

Tafisa is the leading international sports for all organization founded in the 1960s with three primary goals - provide global networking and sharing opportunities, promote various sports for all program and events and develop sports for all and physical activities internationally. This was the first time the Tafisa World Congress has been held in Korea and about 600 Tafisa members from 90 countries attended the event. The congress was held at Lotte Hotel World in Seoul from Wednesday to Sunday.