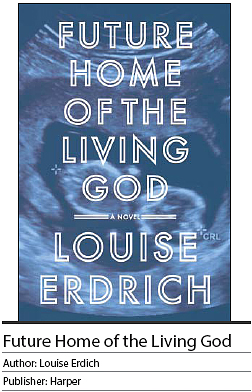 Evolution runs amok in Louise Erdrich’s new novel, “Future Home of the Living God.” Ladybugs are the size of cats. Dragonflies have three-foot wingspans. Few women survive childbirth because of a fatal autoimmune response, and because infants are bigger, some are too big for the birth canal.

These babies also walk sooner and are thought to be incapable of speech. An authoritarian government recruits patriotic women as “womb volunteers” to harbor embryos frozen before the mysterious calamity. Gourmet food is promised: “Our chefs are waiting for you!” intones Mother, the voice of the new regime.

Witnessing these alarming developments is Cedar Hawk Songmaker, who is pregnant and learning how valuable she may be to those who have assumed power in the United States. She begins her story - in diary entries addressed to her unborn child - as she reconnects with her birth mother, an Ojibwe gas station owner on a nearby reservation. Cedar is the adopted daughter of a liberal white couple in Minneapolis. She returns to the reservation to meet Mary Potts, known as “Sweetie,” her birth mom, as society begins to disintegrate.

“This is how the world ends, I think, everything crazy yet people doing normal things,” Cedar writes.

The details of normal life on the reservation, detached from the evolutionary goings-on and the greater political turmoil, make the story believable and therefore more frightening.

Cedar accompanies Sweetie to a tribal council meeting - the entrance to the tribe’s office sits under the “outspread wings of a cast fiberglass eagle” - and later to a casino parking lot where the pair lay sod for a shrine to Kateri, the first Native American Catholic saint.

Sweetie has worked out the potential financial boon to the reservation of a shrine at a spot where gamblers have sighted the saint. Cedar is impressed. She has been underestimating her birth mother.

Her growing appreciation of older women, who help her on an increasingly perilous journey, becomes one of many themes for Erdrich to explore.

Known for her fluid novels of families, reservation life and Catholic faith, Erdrich is new to speculative fiction. “Future Home” owes a debt to Margaret Atwood and P.D. James, but Erdrich makes her own mark on the material.

The U.S. Postal Service is “still operating under a secular postmaster general” and postal employees not only deliver mail but also move dissidents along an underground railroad to safety.

In a tense and memorable scene, Cedar’s adoptive mother, Sera, is reassuring and heroic with “the face of packing the car for a vacation ... the face of the household general.” But Sera can still push Cedar’s buttons, as only a mother can.

Stuck hiding together in a mop closet at the Minneapolis Post Office, they play out old emotional dramas, wounding each other before coming to terms again.

Some threads are left unresolved by the time this short novel ends. Erdrich may be setting up a sequel, or leaving her options open.

While the final pages are beautifully written, the unanswered questions feel unsatisfying rather than intriguing. Still, this is a journey worth taking and a worthy addition to contemporary apocalyptic fiction.