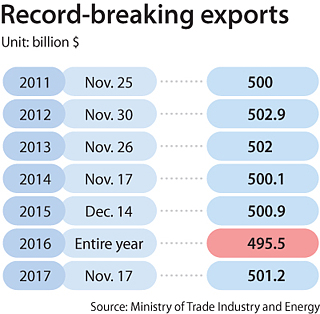 Korea’s exports this year passed the $500 billion mark on Nov. 17, the earliest the milestone has ever been reached.

The government said on Friday that accumulated exports this year were at $501.2 billion as of 2 p.m. on Friday, while imports were at $416.6 billion, raising expectations that the total import and export figure could break the $1 trillion mark this year.

The government credited strong performances by the semiconductor, petrochemical and steel industries for boosting the country’s export market this year, adding that consumer goods such as cosmetics, fashion and agricultural products also saw a boom in the export market.

While Korea enjoyed the growth in the export market, there are concerns that it is overly relying on the semiconductor industry for its export-oriented economy, citing recent trade data.

In October, memory chip exports accounted for 21 percent of total monthly exports, coming in at $9.48 billion out of $44.98 billion. The monthly figure also represented a whopping 69.6 percent hike in the amount of semiconductor exports compared to the same period in 2016. For every month this year, the semiconductor industry has seen more than a 50 percent increase in monthly exports year-on-year, boosting the country’s export market on the back of a shortage of supplies coupled with strong global demand.

With a boom in the semiconductor market, Samsung Electronics and SK Hynix are expected to post combined annual semiconductor sales worth nearly 100 trillion won ($91.3 billion), which is 6.1 percent of Korea’s GDP of 1,637.4 trillion won in 2016.

But the country could face pitfalls from its heavy reliance on the semiconductor industry if the price of memory chips starts to decline in the second half of next year as Chinese chip makers, which have been gradually increasing their R&D investment, are expected to expand their production.

“With the growth of the IoT and AI industries, demand for memory chips is expected to continue into the first half of next year,” predicted LG Economic Research Institute in its 2018 economy forecast report, adding, “But the price of memory chips could fall in the second half with Chinese chip makers expanding production capacity.”