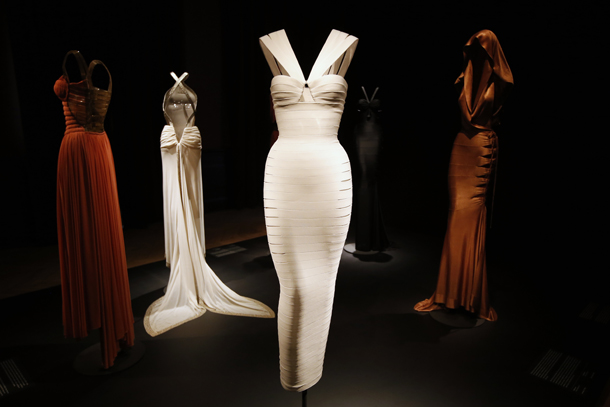 PARIS - Tunisian-born designer Azzedine Alaia, a fashion iconoclast whose clingy styles helped define the 1980s and who dressed famous women from Hollywood to the White House, has died.

The French Haute Couture Federation announced Alaia’s death on Saturday without providing details. Twitter tributes to his influence on fashion poured in from around the world.

Alaia (whose name is pronounced AZ’-uh-deen uh-LY’-uh) sometimes was dubbed the “king of cling’’ for the sculptural, formfitting designs he first popularized during the 1980s and updated over the decades. His clients included women as diverse as Michelle Obama, Lady Gaga, Grace Jones and Greta Garbo.

Secretive and known as a fashion rebel, Alaia was based in Paris for decades but did not take part in the French capital’s seasonal fashion frenzy or flashy ad campaigns. Instead, he showed privately on his own schedule.

The couture federation said Alaia was born in 1940, while the Tunisian Culture Ministry said he was born in 1942. The discrepancy could not immediately be explained.

The supermodel Naomi Campbell, who enjoyed a close relationship with Alaia for many years and affectionately called him “papa,’’ has credited the designer with helping launch her career and taking care of her like a father when she met him in Paris at age 16.

In July, Campbell made a rare catwalk appearance for the designer’s Paris couture show - his first since 2011 - and said on Instagram at the time: “It’s always an honor to walk for you 1986-2017.’’

News of his death sparked a flurry of tributes from figures in the fashion and entertainment worlds.

Ralph Toledano, head of the French Haute Couture Federation, told the AP that Alaia was “an exceptional friend and marvelous person.’’

“An architect for the body, a man for femininity, Azzedine Alaia is undeniably the inventor’’ of an important kind of style, Toledano said.

Fashion designer and former Spice Girl Victoria Beckham said on Twitter that it was a sad day and called Alaia a “true master and one of my biggest inspirations.’’

Singer Rihanna posted an online photo showing a fond moment between her and the famed designer, saying “you will live on forever.’’

Indian actress Sonam Kapoor said she was “deeply saddened’’ by the news and thanked Alaia for “always empowering women and embracing diversity.’’

As a rare Tunisian with global name recognition, Alaia’s death prompted collective grief in his native Tunisia on Saturday, with tributes pouring in from the business and culture worlds and the government.

Multiple museums have held retrospectives of Alaia’s work, including the Guggenheim in New York and Paris’ Palais Galliera, which put on a show in 2013 that highlighted his way of “slowing down time.’’