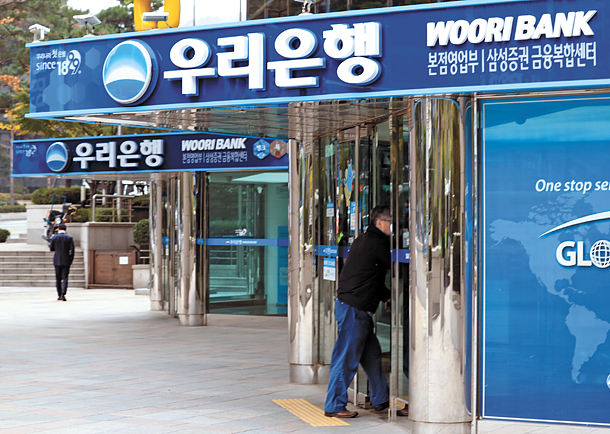 An image of Woori Bank’s headquarters in central Seoul on Nov. 7. The bank was raided by the prosecution that day over a recruitment scandal. [YONHAP]

Major banks are scrambling to overhaul their recruitment and selection processes as multiple accusations of unfair hiring practices have been leveled at financial institutions.

Still, skepticism lingers as to whether a mere change of procedure can root out the irregularities.

One direction is to increase the weight of written tests, a reversal from the current trend that puts emphasis on interviews.

Woori Bank is planning to introduce a written test to its selection process after the bank was found to favor applicants with ties to high-ranking government officials and Woori Bank’s VIP clients.

“We plan to adopt a written exam from next year to make the process more transparent and objective,” said a spokesperson at Woori Bank.

The decision marks the test format’s comeback after an 11 year hiatus as many companies including banks removed it in a bid to bring in people from more diverse backgrounds.

Before that, the majority of banks used written exams in the early stages of the application process. These exams were often referred to as geumyoong gosi, which translates as the civil service exam of the finance sector because of their high difficulty level.

Some banks, however, eliminated the exam since the written test made it harder to find recruits with flexible and creative problem solving skills.

The spokesperson also added that the bank is considering letting an outside agency handle the entire process so that any undue influence from within the company could be countered.

Woori was accused of unfairly recruiting some 16 applicants in 2016 after a human resources team received a “recommendation” document that listed their names and family backgrounds. They were mostly sons and daughters of the bank’s VIP clients as well as top officials at the Financial Supervisory Service, the country’s financial watchdog, and the National Intelligence Service.

Things get more complicated as the Financial Supervisory Service, the country’s financial watchdog, has also engaged in irregular recruitment practices.

The unfair employment practices occurred last year, when the Financial Supervisory Service hired more people than initially planned in order to take in a person with ties to the agency.

The Financial Supervisory Service vowed to replace the resume review stage with a written test since resumes can specifically imply specific regional or alumni ties. The watchdog will also introduce a blind recruitment process starting next year.

“Only those who pass the first written test can move on to the next stage,” said a spokesperson at the Financial Supervisory Service. “It can ensure more equal opportunity because anyone who applies for the FSS can take the test.”

But few think that the adoption of written tests is a cure-all.

“I would not say such moves are meaningless, but I also wonder if the change can resolve the fundamental problem,” said Jung Yoo-shin, professor of business administration at Sogang University.

“Even if an external agency comes in to hire people, it can be biased,” said Jung who also worked in the finance and investment industry for nearly thirty years.

Jung also noted that the nature of the banking business is vulnerable to such corruptive requests from the government because it is highly affected by the government’s regulations and approval.

The professor suggested that Korea needs to embrace a system in which the names of previous employers and test scores are recorded instead of the current practice of assessing applicants under anonymity.

Following the controversy, Woori Bank launched a task force earlier this month to improve its hiring process and corporate culture after a recruitment scandal that brought down the head of the bank.

Other banks are gearing up to reform their own systems.