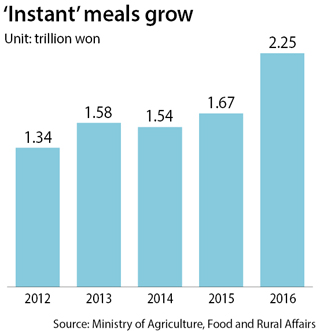 As the number of people living alone rises and more women work, the so-called “instant meal” industry continues to grow.

According to a study by the Ministry of Agriculture, Food and Rural Affairs and the Korea Agro-Fisheries and Food Trade Corporation on Sunday, the home meal replacement (HMR) market expanded 34.8 percent last year compared to 2015 to reach 2.2 trillion won ($2 billion).

Meals that can be eaten right out of the package such as lunchboxes, gimbap (seaweed rice rolls) and sandwiches were the largest segment, 58.7 percent, followed by cooked processed meals such as soups and frozen foods (36.4 percent) and ready-to-eat packaged fruits and vegetables (4.9 percent).

Processed meals that need to be cooked saw the sharpest growth, 40.4 percent, and are now a 820 billion won industry.

Meals that can be eaten right out of the package grew 33.4 percent to reach 1.32 trillion won in sales while ready-to-eat packaged fruits and vegetables grew 15.1 percent during the same period to reach 109.9 billion won.

“The HMR market is continuously expanding due to various efforts by manufacturers including developing new wrappers, aggressively releasing new products and diversifying the meals,” said Park Sung-woo, the Food Ministry Director for food industry policy. “But also changes in lifestyles, a rising number of women participating in the economy as well as the rising number of households whose members are two or less seem to be affecting the market.”

According to the study, sales of meals that can be eaten right out of the package at convenient stores rose 32 percent to 628.7 billion won, and now account for nearly 50 percent of that industry.

This signifies that many single people are shopping at convenience stores rather than discount chains or supermarkets to buy dinner, especially since the quality of such products has improved.

Of those items sold at convenience stores, lunchboxes skyrocketed 63.1 percent to reach 216.8 billion won. Lunchboxes now account for 34.5 percent of sales of meals that can be eaten right out of the package, up 6.6 percentage points compared to 2015.

Although the triangular gimbap remains the biggest item in that category from convenience stores with a market share of 34.9 percent, it saw slower growth of 19 percent during the same period to reach 219.7 billion won.

Such demographic changes are encouraging the food and beverage industries to come up with products that are convenient and ready to eat.

One major food company in that business is CJ CheilJedang, which in October announced goals of increasing its sales of HMR products to 3.6 trillion won by 2020.