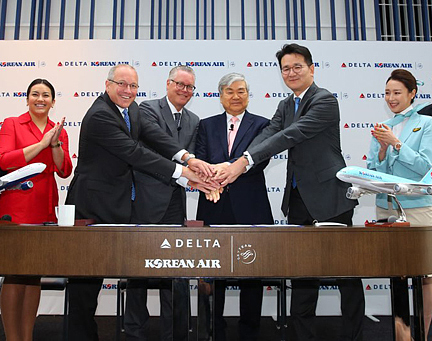 U.S. regulators on Friday approved a joint venture between Korean Air and Delta Air Lines, paving the way for the two flight operators to further enhance their trans-Pacific partnership.

Korean Air said Sunday that the U.S. Department of Transportation gave the green light to the joint venture arrangement that the two airlines struck on June 23, which will enable the two to share revenue and costs from flights with antitrust immunity, within the scope of their joint venture.

“With the approval by the U.S. Department of Transportation, we are expected to have momentum in realizing the trans-Pacific joint venture. While we now await another approval from the Ministry of Land and Transport [in Korea], we will implement the necessary measures to prepare for the start of the joint venture project,” said Korean Air in a press release.

Should the Korean regulators also approve the bilateral partnership, the two companies could provide customers with the ability to earn and redeem miles on mileage programs from either airline.

The two will also raise the level of cargo cooperation and work together on sales and marketing initiatives in Asia and the United States.

At the signing ceremony of the joint deal on June 23 in Los Angeles, Korean Air Chairman Cho Yang-ho said the joint venture would create “synergies” that would be “good for travelers, our companies and our countries.”

Delta CEO Ed Bastian remarked that the two partners were “building a world-class partnership that will offer more destinations, outstanding airport facilities and an unmatched customer experience on the trans-Pacific,” according to the airline.