Matthew Shampine, general manager of WeWork Korea, recently ditched his old American phone number for a Korean one and opened a local bank account. As an ethnic Korean adopted to the United States, he has been learning Korean from a tutor three times a week. He loves soju so much that the refrigerator at his new house in Yeouido, western Seoul is packed with the alcoholic beverage.

All this happened in a matter of just three months after he was promoted to take full charge of the Korean unit in August. Having joined WeWork in January 2013, he spent two years as head of marketing and revenue for WeWork’s Asia Pacific market before the latest promotion, going back and forth between Korea and other Asia Pacific countries.

“We are going to aggressive keep expanding throughout Seoul this year and next year and every subsequent year to kind of build all around the city,” he said in a recent interview at WeWork Euljiro, where he keeps his office as well. “In a while it may seem like a cluster of buildings right now in Gangnam, but we do believe in expanding throughout the rest of the city as well for sure because Seoul is such a huge city in terms of distance.” 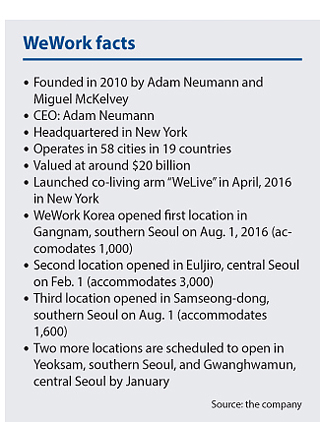 He noted that WeWork is in fact looking at “everywhere” in Korea - be it Pangyo, Gyeonggi, or Busan.

“I just personally transitioned my role to focus on Korea, so the first thing is trying to make sure we are adequately staffed for that scale and continuing to look for new locations.”

The seven-year-old company, valued at about $20 billion, currently operates across 58 cities in 19 countries. On upbeat prospects for the fast-growing co-working giant, Japan’s SoftBank in August made a $500 million investment to help it expand its operations in Korea, China, Japan and Southeast Asia more broadly. Shampine declined to specify how much of that fund has been allocated to Korea.

With the rise of the gig economy, also known as the sharing economy, and ever-increasing land prices, co-working spaces have been sprouting up across the capital recently. A handful of local businesses - such as Hyundai Card, a credit card issuer, Fast Track Asia, a local start-up, and Toz Business Center - have jumped on the bandwagon and most recently, Spaces, a Dutch co-working space operator, opened its first location at Gran Seoul building in Jongno, central Seoul, in September.

With regard to the intensified competition for shared offices in the city, Shampine said he believes his company stands out from the others in that it offers a unique value - connecting people through the vast network of members across its offices around the world, from New York to Delhi to Melbourne and Shanghai and its brand value that has empowered it to attract diverse members.

“I’ve been to a few [other local co-working spaces] but I don’t see competition that way,” he said. “How to provide value to members is much more important than what someone else is doing.”

He went on to say that WeWork can be a good platform for Korean companies that need to go international because the domestic market is relatively small.

“We can make it happen much faster by connecting them with the rest of the world.”

He also mentioned that one upshot of WeWork is “connecting” members with varied personal and professional backgrounds.

“It’s really hard to predict but really cool things happen when you put them all in the same building.”

Members are not only entrepreneurs and start-ups but also people trying out the service space for the first time - lawyers and accountants as well as people working in PR, marketing and recruiting - teams from large companies such as Microsoft and Shinsegae and agencies that have recently broken off from larger companies to start on their own.

They constantly bump into each other and develop ties through events and parties that take place five to seven times a week with themes ranging from yoga to Halloween to panel discussions and Demo Days. On the day of the interview, an event themed on women in leadership roles was scheduled for the evening.

Shampine himself landed a job at WeWork after becoming a member at its initial location in Manhattan. While he was working as a web developer for Mercedes-Benz, he joined forces with four programmers there to launch their own digital agency and they moved into WeWork. There he went on to co-found WeWork Labs, an incubator for early-stage start-ups, with WeWork founders and has climbed the corporate ladder ever since.

Asked to assess how competitive Koreans are in the global start-up scene, he mentioned several of their strengths as he is also actively involved in being an angel investor for companies in both the United States and Korea.

“Korea has a lot of really smart, intelligent people and there are a lot of great universities. We are hosting the fourth ‘Be the Rocket’ program,” he said.

“Be the Rocket” is Seoul National University’s start-up acceleration program and WeWork Korea has been supporting it since 2016 by renting a venue for the event and providing office space to the winners.

He also cited other upbeat aspects of the Korean start-up environment.

“China is China, but Korea is a great place where people can feel comfortable and meet a lot of people. Korea is a great hub for meeting and connecting people together. You also have an engineering talent for sure and a lot of great companies that are working on expanding themselves abroad.”

With regard to the language barrier, the most common weakness cited by Korean entrepreneurs hoping to spread overseas, he said, “I have seen [Koreans’ English proficiency] significantly getting better every day over the last 10 years. Koreans in general are very international in terms of studying abroad and their connections.”

Will WeLive, a co-living business launched by WeWork in New York and Washington D.C. last year, ever head to Korea?

“From what I know, we will announce the project in the near term. I personally believe it would be very successful here,” he said. “But as of now we are very much focused on making sure we build a great WeWork Korea.”