Everyone wants an Olympic coat

Everyone wants an Olympic coat 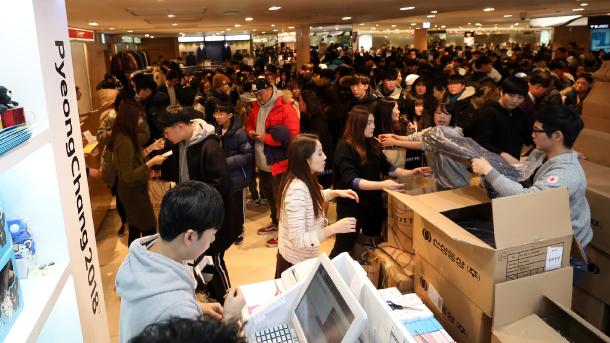 The queue was way longer than she could have imagined. When she confronted a couple who cut in line ahead of her, she was chillingly told, “Mind your own business.”

It wasn’t until 1 p.m. that Ji reached the head of the queue - and took possession of her dream coat.

The PyeongChang Winter Olympics coat is the latest must-have item in Korea, with nearly every store across the country running out of stock. Last Friday when Lotte’s main branch in Sogong-dong, Jung District, central Seoul, announced new arrivals, so many people descended on the store that police officers had to stand guard for crowd control.

The coats are a limited edition with only 30,000 made. They have been sold in about 20 different stores nationwide since Oct. 30. A spokesman of Lotte Department Store, the official sponsor of the upcoming Winter Olympic Games, said 23,000 coats have been sold so far, with 7,000 remaining. They come in black, white and grey and are unisex.

New stock has been promised at stores this Wednesday, but that could change “at any time” due to security issues, said the spokesman. Further information will be announced on the department store’s official website.

The words “Passion Connected,” the official slogan for the PyeongChang Winter Olympics, are inscribed on the left arm and back of the coat.

The cheap price tag is a big reason for the Olympic coat’s popularity, retail analysts said. The filling is 80 percent goose down and 20 percent goose feathers, but the coat’s price is half of a similar coat from other brands. The Olympic coats are manufactured by Shinsung Tongsang, which is ranked third among domestic SPA companies, or specialty retailer of private label apparel.