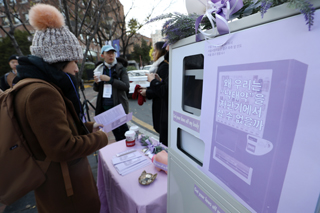 A passerby reads a pamphlet calling for the legalization of abortion and abortion pills in front of a vending machine set up by the feminist group Femidangdang in Jung District, central Seoul, Sunday. The machine, on which “Why Can’t We Buy Abortion Pills in Vending Machines?” is written, was installed by Femidangdang to raise awareness of the issue. [NEWS1]

A vending machine installed by a feminist group in front of the Seoul Museum of Art in Jung District on Sunday is in the spotlight for dispensing pro-abortion materials.

Femidangdang, a Korean feminist group, set up a “Mifegyne for everyone” dispenser to bring awareness to Mifegyne, also known as the abortion pill.

“Most Korean women believe they can only get abortions through surgery, so we wanted to let women know about different options,” one member said.

Mifegyne and other abortion pills are illegal in Korea, and Femidangdang is calling for it to be made available. However, the so-called morning after pill, which has to be used within 120 hours of intercourse, is legal.

The vending machine dispensed vitamins along with a pamphlet calling for legal access to safe abortion methods like the pills. Abortion, with the exception of some cases like pregnancy stemming from a rape, is a crime in Korea and punishable by up to one year in jail and 2 million won ($1,827) in fines.

Femidangdang was formed in May 2016 after a murder in Gangnam District, southern Seoul, in which a man fatally stabbed a woman who was a total stranger, raising the issue of misogyny in Korea. Though its ultimate goal is to become a political party, the group has fought for various issues including legalizing abortion. In late 2016, it organized several “black protests” to show support for revising Korea’s abortion laws by wearing black.

Korea’s abortion laws were written in 1953. On the Blue House website’s petition page, over 235,000 people signed a petition calling for the legalization of abortion and Mifegyne pills.

In both the petition and Femidangdang’s brochures, pro-choice activists argued that the current abortion laws place the responsibility of pregnancy solely on women. They urged the government to guarantee the safety of women who wish to abort by allowing the legal sale of Mifegyne pills, which they said have a 90 percent success rate of ending pregnancy if taken within the first seven weeks.

Despite the legal restrictions, some tens of thousands of women in Korea are believed to have abortions every year. The abortion law has not been enforced strictly since the Park Chung Hee administration turned a blind eye to the practice to control high birth rates in the 1960s. But with doctors still unwilling to perform surgical abortions for fear of punishment, options to end pregnancies are costly and dangerous. Some women fly to China and Japan to undergo surgery, while others buy abortion pills online through unreliable brokers, according to the brochure.

The journey to legalizing abortion will not be easy, however. Not only is Korea home to a large Christian population, but its low birth rate of 1.3 births per woman make some hostile to the idea of allowing women to get abortions. A petition posted on Nov. 2 on the Blue House petition page asking for abortion to be kept illegal has already gained 13,500 supporters.

Femidangdang plans to continue agitating for change. It is planning another protest on Dec. 2, with the rallying cry, “If abortion is a crime, the criminal is the government.”