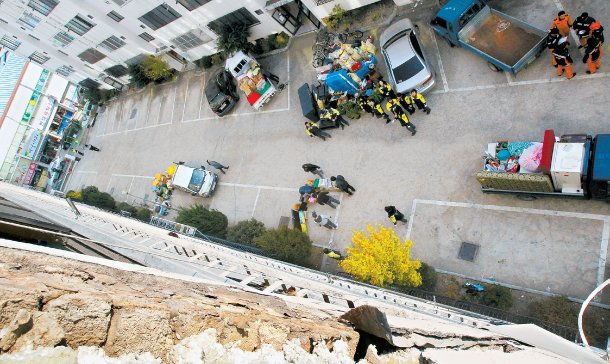 Residents of the Daeseong Apartment complex move from their houses on Saturday to a temporary shelter after the building was severely damaged. It will be demolished because of safety concerns. [GONG JEONG-SIK]

At least 3,300 structures in Pohang and neighboring cities were damaged by the 5.4-magnitude earthquake that rattled the southeastern port city last week, local authorities announced Sunday, up from nearly 1,470 counted the day before, as safety officials find more cracks and rubble throughout the Gyeongsang region.

By 11 a.m. Sunday, the National Disaster and Safety Control, which is run by the Ministry of Interior and Safety, said 2,832 private establishments and 557 public ones were affected by the quake.

Of the private facilities, 2,628 were houses, most of which reported damage to their roofs. Many of the public facilities that were damaged were schools that developed cracks. A total of 227 schools were affected, 110 of which were elementary schools.

Fifteen people are still being treated in hospitals, while 67 returned home fully recovered. The number of people displaced dropped from 1,797 on Friday to 1,318 Sunday, most of whom were dispersed to 13 evacuation centers in Pohang.

As of 8 a.m. Sunday, the earthquake was estimated to have caused over 55.2 billion won (about $50 million) worth of damage, 46.5 billion won of which were in public facilities.

An apartment complex in Pohang’s northern Buk District, along with two other studio apartment buildings were so severely damaged they will have to be demolished, said the National Disaster and Safety Control. Fifty-two elevators in Pohang were forced to be halted due to technical malfunctioning.

Fifty-six aftershocks were counted by Sunday morning, including three on that day with magnitudes slightly over 2.0. Some 22,500 civil servants, volunteers and soldiers are involved in restoration work.

“The market is completely empty,” lamented a man in his 60s who sells gwamegi, or half-dried Pacific herring, at Jukdo Market.

“It’s usually peak season from November through January, but nobody’s buying my fish because of the earthquake.”

Another merchant who sells snow crabs said it felt like his clientele dropped by a half after the quake. A worker at a restaurant near Yeongil Beach said the number of beachgoers appeared to have dropped by more than 70 percent.

The Pohang cruise ride, which sails north from Pohang to Busan’s Songdo Beach, had only 80 tourists at 11 a.m. Sunday, far lower than the usual 400. On Saturday, 108 people took the ride.

“More than 20 groups canceled cruise tours after the earthquake,” said a worker. “Kindergartens, community groups, you name it - they’re all calling it off.”

Homigot, the eastern tip of Pohang best known for its scenic sunrises, was nearly empty as well on Sunday. Moon Hyang, 45, who runs a snack bar near Homigot Square, said, “My business really isn’t faring well after the earthquake. I’ve worked here for the last 20 years and have never seen such an abrupt drop in the number of customers.”

Admitting that the earthquake caused severe damage to the local economy, Sohn Jeong-ho, head of the Pohang city government’s Economy, Employment and Labor Division, said the office was planning to announce economic countermeasures this week after gauging the precise scope of the destruction inflicted.

A teacher at the Phsunrin orphanage, which had damage to its walls and ceiling from the earthquake, said she was worried about the 79 orphans who will have to return to the establishment today after the city government said the building was safe.

The kids had taken refuge at a nearby elementary school until Sunday, but were forced to leave because classes resume today.

“The kids are so excited now,” said the teacher, who wished not to be named. “It’s really crowded here at the evacuation center and there’s a lot of food, so the kids think of this entire thing as some sort of a camping-out.

“But I’m afraid they might panic once we return to the orphanage because they’ll see cracks on the walls.”

An administrative worker for the orphanage said she had asked the Pohang city government for a different place to house the children, but hadn’t received any positive feedback yet.

“On the first safety checkup, which was based on visual inspection, we were told that the building was safe as long as we stay out of one of the eight rooms ... But these are kids and the city has to prioritize their safety.”

Meanwhile, the Ministry of Education will announce today the test venues for 6,000 Pohang high school seniors planning to take the College Scholastic Ability Test this Thursday, after the earthquake forced the government to postpone the college entrance exam by a week.