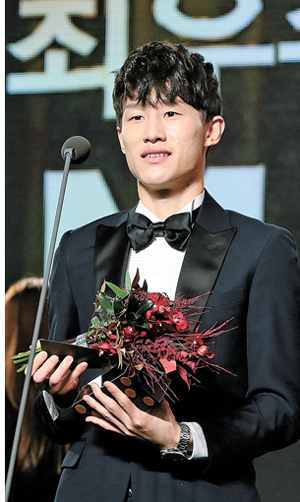 Jeonbuk Hyundai Motors midfielder Lee Jae-sung poses for a photo with the K-League Classic MVP trophy at the K-League Awards at Seoul Hotel on Monday. [YONHAP]

Lee was pivotal in Jeonbuk winning their fifth league title. He scored eight goals and provided 10 assists in 28 matches for Jeonbuk.

This is the first time since 2007 that a midfielder has claimed the top honor.

It’s also Lee’s first MVP honor since he made his pro debut in 2014. He previously won the Young Player award - which is presented to the top Korean-born player aged 23 or younger with under three years of professional experience - in 2015.

“I was able to grow because of Jeonbuk and head coach Choi Kang-hee,” Lee said after winning the MVP award. “I’m really a happy player. I will keep working hard to become a player who can develop Korean football.”

Johnathan, as he is commonly known, was the league’s top scorer after netting 22 goals in 29 matches. The 27-year-old Brazilian was looking to become the first player to win the MVP honor in both the first and second divisions.

Johnathan previously claimed the MVP award and scoring title in 2015, when he was with Daegu FC in the second-tier K-League Challenge.

The Classic operates the split system, in which 12 teams are divided into two groups after their first 33 matches. They then play an additional five matches within their groups, with those in Group A continuing their race for the championship, while teams in Group B compete to avoid relegation to the Challenge.

The Coach of the Year honor went to Jeonbuk head coach Choi Kang-hee.

Choi, who won his fifth coaching accolade, earned 84 votes, while Jo Sung-hwan of Jeju United had 44 and Kim Do-hoon of Ulsan Hyundai FC had five.

For the Young Player award, Jeonbuk defender Kim Min-jae was the winner after collecting 120 out of 133 votes. He beat Ulsan midfielder Lee Yeong-jae and Seoul defender Hwang Hyun-soo.

Kim, 21, scored two goals in 29 matches in his K-League debut season and led Jeonbuk’s defense that conceded a league-low 35 goals this season.