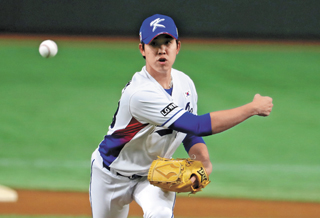 Jang Hyun-sik of the NC Dinos.

The Korean national baseball team received 5 million yen ($45,000) and, with another loss, Korea’s all-time head-to-head record against Japan is now at 20 wins and 23 losses.

Korea’s batters were already considered weak going into the event, but the struggle of the pitchers on Sunday just made matters worse. Throughout the game, Korean pitchers gave up a total of eight walks. Park Se-woong of the Lotte Giants, Korea’s starting pitcher, gave up one run, three hits and three walks in three innings. Shim Jae-min of the KT Wiz, who got on the mound after Park, gave up a series of walks when the count was up with two outs.

Following Shim, Kim Myeong-sin of the Doosan Bears, Kim Yun-dong of the Kia Tigers, Kim Dae-hyun of the LG Twins and Lee Min-ho of the NC Dinos got on the mound to try slowing the onslaught, but failed. Japan scored six more runs in the fifth, sixth and seventh innings. At the same time, Korea’s batters continued to struggle, getting only three hits with six strikeouts in the first seven innings and failing to get a single run on the board throughout the game. 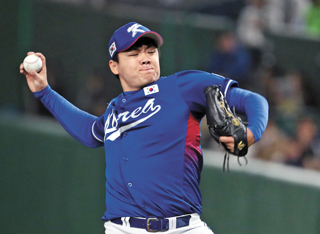 Im Gi-yeong of the Kia Tigers.

The inaugural event was arranged by the Korea Baseball Organization (KBO), Nippon Professional Baseball (NPB) and Chinese Professional Baseball League (CPBL) for the development of baseball in Asia. Each team was only allowed to bring players under the age of 24 or with three years or less of professional experience - with each team allowed three wild cards.

To better prepare for the upcoming events - the 2018 Asian Games and the 2020 Tokyo Olympics - Korea chose not to use the wild cards while Japan and Chinese Taipei did. Though Korea failed to win the inaugural APBC, Sun Dong-yol, manager of the Korean national baseball team, was able to find promising players for the upcoming events.

Jang Hyun-sik of the NC Dinos, the starting pitcher in the opening game against Japan on Thursday, gave up one run, two walks and four hits in five innings. The 23 year-old right-handed pitcher threw fastballs at a speed of 150 kilometers (93 miles) per hour and sharp sliders.

“[Jang Hyun-sik’s] pitching form and slide step shut out Japan’s mobility,” said Sun. “Even when his fastballs were thrown right at the center of the strike zone, it was too good that the batters couldn’t make contact easily.”

Then, on the second day, during Korea’s game against Chinese Taipei, Im Gi-yeong of the Kia Tigers picked up a win by giving up two hits and three walks while striking out seven in seven innings. To hit off Im’s pitches, Chinese Taipei had seven left-handed batters, but Im proved stronger on the night.

In addition to the two pitchers, bullpen pitchers Park Jin-hyun of the Giants and Jang Pil-joon of the Samsung Lions left quite an impression. Though Jang is 29 years old, he was able to compete since last season was only his third in the KBO.

Having made his debut as the Korean national baseball team’s manager, Sun’s next goal is to win a gold medal at the 2018 Asian Games in Jakarta. The 45-man entry list will be announced in May 2018.

“Since the Asian Games will be played during the season, the players shouldn’t have much trouble keeping up their physical condition,” Sun said. “Aside from individual ability, I’ll consider teamwork [in the upcoming national team selection]. We need a pitcher that has the ability to strike out batters with better control and change-ups.”