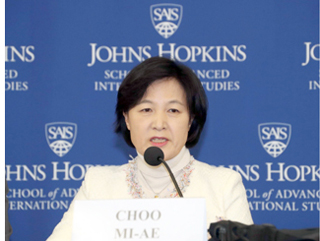 “I cannot comment on that,” said a spokesperson of the Ministry of Foreign Affairs in a briefing room on Nov. 16. He was asked about the foreign ministry’s position on ruling Democratic Party Chairperson Choo Mie-ae’s remarks in Washington, D.C., that U.S. President Donald Trump had asked President Moon Jae-in if reunification should really be attained.

A Blue House source said in the morning that the confidential conversation between the two leaders could not be confirmed. This is the diplomatic practice.

Aside from the official press release and news conference that two countries agree on, conversations between two heads of states are considered a diplomatic secret.

However, Choo mentioned it in the United States a week after the summit. She said that Trump asked the question in a closed-door meeting. She also said that Moon answered that reunification must be accomplished — even though she does not know exactly what Moon said.

When Choo met Washington correspondents on Nov. 15, she said she heard it from Moon at the VIP waiting room in Seoul Air Base before the president embarked on a tour to the Association of Southeast Asian Nations last week.

She said that since the president had told her in person, it was not a secret. She also remarked that while she did not directly hear Moon’s response, the question could almost sound like an insult to someone who was displaced or lost their family after the 1950-53 Korean War.

She said she thought that Moon might have cited Germany’s example to emphasize the significance of unification.

At the luncheon with reporters, she also said that if the United States makes excessive demands, Korea may have to give up the FTA. It would work if it was really part of a “good cop/bad cop” strategy prearranged with the government. But if not, her comment could affect the ongoing FTA negotiation between the two countries.

With regard to Liberty Korea Party head Hong Joon-pyo’s remarks on the U.S. Republican Party’s support for redeployment of U.S. strategic nuclear weapons after returning from a visit to the United States, Choo said that the actual atmosphere in Washington was quite different. “Since such remarks by the opposition leader could mislead the people as if representing the entire Korean Peninsula, both ruling and opposition parties should be prudent,” she said. Choo also must keep in mind that the United States is paying attention to her words, as her words have special weight as the ruling party leader of a U.S. ally.

*The author is a political news reporter of the JoongAng Ilbo.