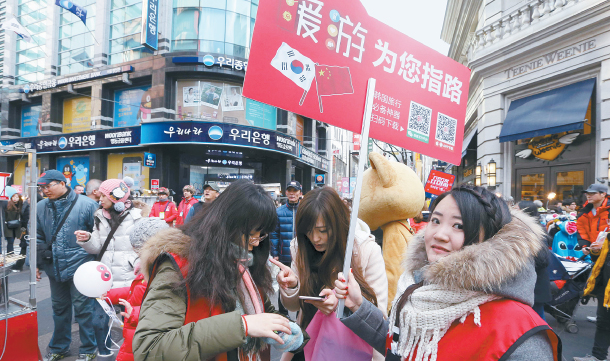 Chinese group tourists are coming to Korea this month for the first time since mid-March, when Beijing’s unofficial sanctions over the installment here of an antimissile system took effect.

“A group of 25 tourists from Shanghai are landing on Jeju Island on the 28th,” New Hua Cheng Travel CEO Yu Cheng-de told the JoongAng Ilbo on Sunday. “This suggests retaliations regarding Thaad [Terminal High Altitude Area Defense] are easing and signals the start of re-attracting Chinese tourists to Korea.”

“Economic retaliations against Korea were eased after the China’s 19th National Congress took place last month, but there were no actual group tours coming to Korea,” said Yu. “We’re now pushing through many other group tours starting from the Shanghai team. Considering the number of group tour applicants we’re preparing, chartered flights between China and Jeju Island will restart around December.” 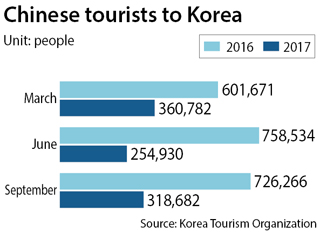 Another tour agency CEO also said that the company was organizing a large-scale incentive tour, hoping that “it may be possible by December.”

Last week, the Korea Association of Travel Agents (KATA) and 70 or so tour agencies targeting Chinese tourists held a meeting.

“The focus of the discussion was to elevate the overall quality of domestic tour products,” said KATA Chairman Yang Moo-seung. “We’re looking for ways to increase the percentage of revisiting tourists and become a sustainable tourist destination.”

Low-cost, low-quality travel and the prevalence of unauthorized tour offices and guides have been repetitively cited as problems regarding Chinese group tours. One representative malpractice is the so-called “poll tax,” whereby Korean tour agencies pay Chinese tour agencies to keep them suggesting Korea as a destination. Some local tour offices offered to pay all the accommodation fees for tourists who come here. But eradicating such practices will not be very easy. Last year, when the number of incoming Chinese tourists reached its highest level, poll taxes were 500 to 800 yuan ($75 to $121) per person.

Some industry sources point to duty frees as the reason for last year’s increased poll tax.

“There were duty-free operators who offered money to be used for pulling in Chinese tourists as part of the commission they pay to local tour offices for bringing in customers,” said an industry source on the condition of anonymity. “This is why the cutthroat competition to cut down prices is hard to stop.”