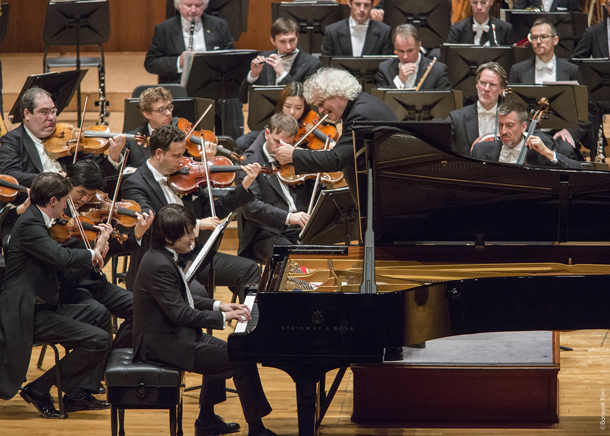 As Sir Simon Rattle described him, Korea’s star pianist Cho Seong-jin proved he’s indeed a “poet of the keyboard” to his Korean fans during his performance with the world-renowned Berlin Philharmonic Orchestra, playing Maurice Ravel’s “Piano Concerto in G Major, M.83” at the Seoul Arts Center on Sunday evening.

The much-anticipated concert was probably the last time the combination of three great names in classical music - Cho, maestro Rattle and the Berlin Philharmonic Orchestra - will perform together, as Rattle will be handing over his baton to Kirill Petrenko at the end of this year. People walked out of the concert hall saying that it was well worth the price, as some had paid as much as 450,000 won ($410) for a seat.

Although Cho was a replacement for Lang Lang, only joining rehearsals three days before kicking off their Berlin concert early this month, Cho performed on Sunday as if the position had always been his. Ravel’s Piano Concerto in G Major, which is in three movements, is known for being heavily influenced by jazz and Spanish sounds, offering the perfect opportunity for Cho to show off his lyrical and tranquil style of piano playing.

By selecting Debussy’s “Images, Book 1 - No.1 Reflets dans l’eau” as an encore piece, which is included on Cho’s latest recording of Debussy with the Deutsche Grammophon, Cho showed his Korean fans how he has developed since winning the Chopin International Piano Competition two years ago. His performance seemed like the pianist has been preparing for this accompaniment all along.

Cho has long said that he has always had two dreams - to perform at Carnegie Hall, which he did on Feb. 22, and to perform together with the Berlin Philharmonic.

“I didn’t know those dreams would be achieved so fast,” the pianist said during the press conference prior to the Sunday concert. “Since I’ve achieved both of them, my dream now is to be re-invited by them.”