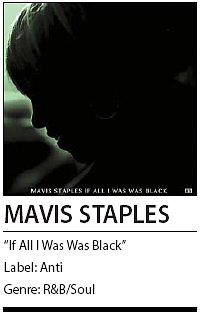 Mavis Staples seems to grow in stature the longer she keeps chronicling America and its contemporary woes.

Her constant frame of reference - the civil rights movement of the 1960s, and her family’s proud role as musical pathfinders in those tumultuous years - is useful as she addresses today’s troubled racial waters.

In her third major collaboration with songwriter and producer Jeff Tweedy of Wilco, Staples examines the American scene in 2017, and finds it wanting in kindness and compassion. Musically, though, she has found a delicious, bass-heavy groove, slow and easy and perfectly suited for the confident, wise voice of a veteran singer who has been performing since 1948.

“If All I Was Was Black’’ is overtly political. Tweedy, lead writer on the project, says it would feel wrong not to face what is happening in the United States head on. “We Go High,’’ for example, builds on a notable phrase from a Michelle Obama speech. It’s a record that describes an America where “people are dying, bullets they’re flying.’’