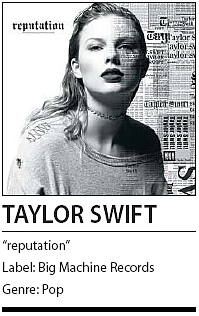 If you’d stop thinking about her reputation, you’d actually appreciate the musicality of Taylor Swift’s “reputation.”

Sure, she named the album that so there would be blog posts and essays deciphering the lyrics - was that about Kanye? Calvin? - but listen to the music, and you’ll discover pure pop magic.

On 2014’s “1989,” Swift showed she could deliver great pop songs. On “reputation,’’ her sixth album and second pop effort, she has mastered it.

The production level has enhanced, with little nuanced sounds throughout the album - including use of the vocoder - giving the tracks additional appeal. A good number of the 15 songs are bass heavy and beat-laden, while Swift tells the story of her life in the last two years - going from tabloid drama to falling in love.

She’s striking on the exceptional “End Game,’’ veering into contemporary R&B territory. Co-stars include rap hitmaker Future and Ed Sheeran, who is sing-rapping in the style he performed before you fell in love with “Thinking Out Loud.’’ This album’s got an outstanding reputation.