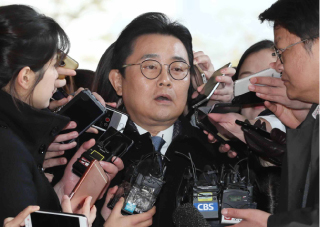 Jun Byung-hun, who resigned as Blue House senior secretary for political affairs last week amid allegations he received bribes from Lotte Homeshopping in 2015, appeared at the Seoul Central District Prosecutors’ Office Monday for questioning, becoming the first high-level official from the Moon Jae-in administration to be summoned by prosecutors as a suspect.

The former secretary denied any wrongdoing to reporters before entering the office, saying he felt “sorry” for causing trouble to the Blue House.

Jun is suspected to have forced Lotte Homeshopping to donate 330 million won ($300,300) to the Korea e-Sports Association (Kespa), which he served as chairman, in 2015. At that time, Jun was also a lawmaker representing Dongjak District, southern Seoul, and a member of the parliamentary Future Planning, Broadcasting and Communications Committee, which had considerable influence over the government’s decision to renew business licenses for home shopping channels.

Lotte’s donation was made around the time its business license was renewed for three years by the Ministry of Science, ICT and Future Planning. Prosecutors are wondering whether the cash was in return for favors from Jun.

Jun’s two former secretaries, who worked at his parliamentary office, as well as a broker are all in pre-trial detention for allegedly pocketing one-third of the Lotte donation. Kespa’s secretary general has also been detained for helping the money flow into Jun’s office.

Apart from the Lotte donation, Jun will be asked whether he used Kespa funds for personal expenses and whether he pressured any other home shopping channels or telecommunications companies to make financial donations in return for favors.

The ruling Democratic Party has been cautious with comments on the case, with Rep. Kang Hoon-sik, the party’s spokesman, saying he looked forward to seeing the probe eliminate “needless speculation and controversy.”

Rep. Chang Je-won, spokesman of the main opposition Liberty Korea Party, castigated the Blue House for remaining silent about Jun, calling it “arrogant” for not explaining to the general public how Jun managed to get chosen for his former Blue House post in the first place. The party said whoever was in charge of the screening process should be reprimanded and issue a formal apology.

Rep. Kim Kyung-jin, spokesman of the minor opposition People’s Party, said it was “beyond basic common sense” that Jun hadn’t known about his former aides’ shady deals, and encouraged the Blue House to punish the personnel manager and offer an apology.