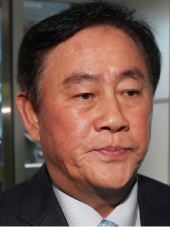 Prosecutors raided the residence and office of Rep. Choi Kyung-hwan of the Liberty Korea Party on Monday over allegations that he received kickbacks from the state spy agency in 2014.

Investigators from the Seoul Central District Prosecutors’ Office searched his house and his office in the National Assembly to confiscate evidence, its office said.

The four-term lawmaker is suspected of taking 100 million won ($91,200) in bribes from the National Intelligence Service (NIS) when he was finance minister under the Park Geun-hye administration.

Prosecutors believe the money was paid to lobby him for retaining the NIS’s off-book funds, with which the spy agency allegedly paid Choi, when then-opposition parties pushed for scaling it down on the basis of the untraceable nature of the “NIS special activities fund.”

Choi held the post, which doubles as the deputy prime minister position, from 2014 to 2015.

The raid is part of a far-reaching probe into a massive scandal at the NIS involving the ousted President Park Geun-hye and her two aides.

Prosecutors have alleged that the NIS paid Park and her aides at least 4 billion won from its coffers, until months before she was forced out of office over an influence-peddling scandal.

Two former NIS chiefs have been arrested for arranging the illegal payments. Lee Byung-kee, one of the two arrested, apparently told the prosecution that he approved the NIS payment to Choi when he was the director in October 2014.

Prosecutors said they plan to summon him for questioning as soon as they finish analyzing the seized evidence. He has denied any wrongdoing.