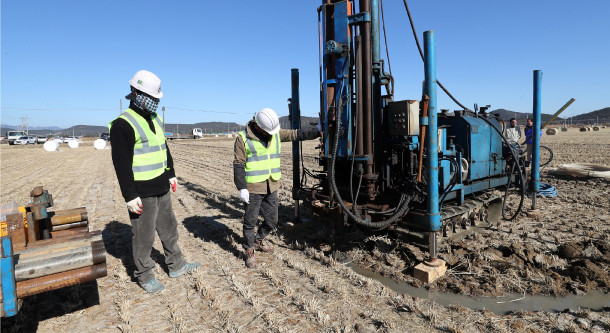 Experts discovered traces of soil liquefaction in about 100 locations near the epicenter of the earthquake that hit the North Gyeongsang city of Pohang last week.

“We detected signs of soil liquefaction in about 100 locations within a 5-kilometer [3-mile] range of the epicenter,” said Kyung Jae-bok, professor at Korea National University of Education in North Chungcheong, during an inspection by the Korea Meteorological Administration (KMA) and the Ministry of the Interior, which has been ongoing throughout the city since Sunday.

A 5.4-magnitude quake hit Pohang on Wednesday, damaging at least 5,569 private establishments and 582 public ones, including 233 schools, as of Sunday night, according to National Disaster and Safety Control, run by the Ministry of Interior and Safety.

Soil liquefaction occurs when shaking or some other stress causes soil to completely lose its shear strength, which is the result of friction between soil particles, causing it to behave like a liquid.

“Liquefaction can follow when a quake takes place near a river, lake or sea, shaking up the sedimentary layers,” said Lee Kie-hwa, geology professor at Seoul National University. “When a quake hits, the underground water can mix with other sediment layers and weaken the strength of the soil, leading to a quicksand-like effect.”

Soil liquefaction can be incredibly destructive and is said to have worsened the impact of the 1976 Tangshan quake, which left up to 700,000 dead and is one of the deadliest earthquakes in modern history. According to Kyung, “the weakened ground can cause buildings to collapse.”

Traces of liquefaction could also be found at a location as far as Nam District, some 13 kilometers from the epicenter.

“Right after the quake on Wednesday, we saw a mixture of water and sand sprout up from the ground 1 meter [3.28 feet] high at a residential road in Nam District,” said a spokesperson of Nam District Office. “We had to clean up the place and remove about 25 bags of sand.”

“There may be more traces of liquefaction throughout the city that were not detected,” said Son Moon, a geology professor at Pusan National University in Busan.

This may be the first liquefaction ever detected in the country. The quake that hit Pohang was the second strongest to hit Korea, after the 5.8-magnitude quake in Gyeongju, North Gyeongsang, last year. But no signs of liquefaction were detected at the time.

“The rocks that make up the ground in Pohang are also mostly mudstone,” said Lee Yoon-soo, a geologist at Korea Institute of Geoscience and Mineral Resources, “which is weaker than the granite that makes up most of the area in Gyeongju.”

After the quake hit Pohang, as many as nearly 1,800 people were forced from their homes, though the number dropped to 1,099 on Sunday as authorities continued to renovate houses. Some 80 people were injured during the quake.

The Moon Jae-in government designated Pohang as a special disaster zone on Monday. Designated areas receive financial and fiscal aid. The quake is estimated to have caused damages worth over 55.2 billion won ($50.2 million) as of Sunday.