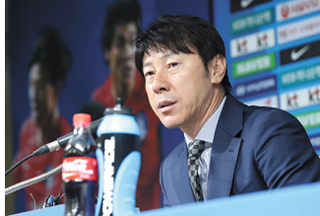 Shin Tae-yong, head coach of the Korean men’s football team, speaks at a press conference at the Korea Football Association headquarters in Seoul on Tuesday. [YONHAP]

The matches will serve as preparation for next year’s FIFA World Cup and offers the team a chance to redeem itself after several lackluster performances in friendly matches. Shin has only earned one victory since becoming head coach of the team in July.

For the E-1 Championship, also known as the East Asian Cup, Shin has opted for a 24-man lineup instead of the usual 23 to give opportunities for new players. Of his selection, Kim Min-jae, a defender for the Jeonbuk Hyundai Motors and the Korean league’s Young Player of the Year, was a surprise because he is still recovering from a knee injury.

The coach wants to potentially use Kim in the World Cup and said he made the addition despite the injury to give him more international experience.

Koreans currently competing in Europe have been excluded from the roster because they are in the middle of their seasons, so most of the selected players are from Asian leagues. The E-1 Championship offers them a chance to prove themselves for the World Cup.

Aside from Kim, four other players from Jeonbuk were added to the roster, including midfielder Lee Jae-sung, the league’s MVP. Jeonbuk finished this season as champions of the Korean league.

Other additions include Jeju United striker Jin Seong-uk, who is joining the national team for the first time, and FC Seoul winger Yun Il-lok and Seongnam FC center midfielder Kim Sung-joon, who last played for the team in December 2014. Sangju Sangmu center back Yun Young-sun is also returning after two years away.

Excluded from the list was Guangzhou Evergrande center back Kim Young-kwon, who was delegated to the wait list.

“It seemed like he had a hard time psychologically during the friendly matches against Russia and Morocco,” Shin said during a press conference on Tuesday at the headquarters of the Korea Football Association in Seoul.

Kim’s position on Guangzhou Evergrande has been unstable ever since the club hired a new coach. Recently, there have been rumors that he might be transferred to Superleague Greece.

“Plans for the East Asian Cup are almost complete,” Shin said. “There will be a competition between new and old players on the team. In defense, I’ll concentrate on strengthening teamwork. Since striker Lee Jeong-hyeop’s team [Busan IPark] is in the FA Cup final, he’ll join the national team upon completion of his club’s schedule.”

The team will face China on Dec. 9, North Korea on Dec. 12 and Japan on Dec. 16. Since the E-1 Championship started in 2003, South Korea has had the most number of wins among the four participating countries, at three.

Even though it enters the event as a defending champion, the South Korean team has lost a bit of its competitive edge this year. The Korea Football Association has scheduled a call-up two days earlier than expected, on Nov. 27. The team will train in Ulsan until Dec. 6, when they leave for the tournament in Tokyo.

“I’m well aware that we can get negative criticism from a poor game,” Shin said. “Rather than negative thoughts, I’ll concentrate on playing great matches that we can win. Since we’ve figured out how to use Son Heung-min [of Tottenham Hotspur], we’ll focus on finding plans B and C in our offense.”