The PyeongChang Winter Olympics are less than three months away, but many are reluctant to make the trip due to the cost of tickets, accommodations and the cold weather in Gangwon in February. 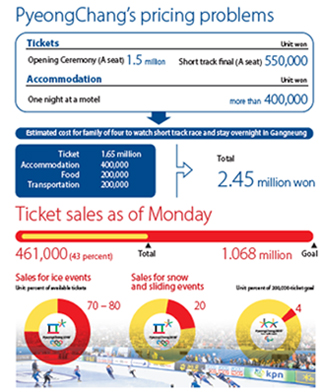 For a family of four to buy tickets to watch the final short track race, it is expected to cost 1.65 million won ($1,512), after the 50 percent discount for minors. In additton to motels near Gangneung Ice Arena costing more than 400,000 won for an overnight stay, not many want individual reservations, as most prefer groups.

According a survey by the Ministry of Culture, Sports and Tourism in September, only 7.1 percent of respondents have said they’ll watch the Games on site, which is 0.8 percent less than the survey in June. The PyeongChang Organizing Committee for the 2018 Olympic and Paralympic Winter Games (Pocog) has set a goal of selling 1.068 million tickets, but as of Monday, only 43.2 percent of that have been sold. The sales have shown some variation by events. In ice events, where Korean athletes are likely to medal, about 70-80 percent of the tickets have been sold, but only 20 percent have been sold for snow and sliding events.

Even worse, only about four percent of Pocog’s goal of 220,000 Paralympic tickets have been sold.

Though tickets cost only 20,000 won for the women’s ice hockey qualification match, the cost for A seats at the opening ceremony are 1.5 million won, and A seats for the final match in men’s ice hockey cost 900,000 won.

“Since the torch relay started, sales have increased,” said Pocog. “We should be able to bring up ticket sales to 50-60 percent of our goal by the end of November.”

Luckily, the help of the government has allowed sales to exceed 40 percent. Seoul created a budget of over a billion won as well as North and South Gyeongsang and other regions coming up with budgets of about 500 million for ticket sales. In addition, the Korea Federation of Banks is expected to buy a billion won worth of tickets for unpopular sports.

But some are criticizing Pocog for putting pressure on companies and local governments to buy tickets.

“Even if the tickets are sold out by shifting the responsibility to local governments, there’s a high possibility that the venues will be empty,” said sports commentator Choi Dong-ho.

In addition to ticket sales, the cost of accommodation is another reason people are hesitating to come. Normally, motels near Gangneung Ice Arena cost less than 50,000 won a night, but during the Olympics, the cost for a night is eight times that at least. Also, since motel owners prefer group reservations, visitors are having difficulty finding rooms, so many have made reservations in Sokcho or Wonju.

The cold weather in Gangneung is another concern. During the 2017 Dream Concert in PyeongChang, a K-pop concert held on Nov. 4, 33,000 people visited Olympic Plaza. Fans watched the performances in 3.4 degrees Celsius (38 degree Fahrenheit) weather for four hours at night, and six people were transferred to the hospital for hypothermia. According to Gangwon Regional Office of Meteorology, the average temperature over the past 10 years in Hoenggye, where the Olympic Plaza is located, on Feb. 9, the day of the opening ceremony, is negative 6.4 degrees Celsius.

Since the Olympic Plaza, which cost 116.3 billion won to build, was built without a roof, spectators will be exposed to the cold. In March 2015, Pocog considered adding a roof to the Plaza, but decided it wasn’t in their budget.