The Samsung Lions announced the surprise signing of free agent Kang Min-ho, who was expected to stay with the Lotte Giants, on a four-year contract worth 8 billion won ($7.3 million) on Tuesday. 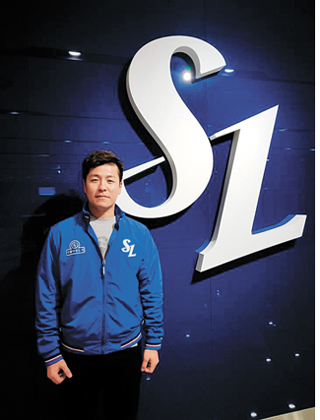 Catcher Kang Min-ho poses for a photo wearing Samsung Lions gear after signing a four-year contract with the Lions on Tuesday. [YONHAP]

“We plan on giving more chances to young players and rebuilding,” the Lions said. “But to do so, we thought that we needed a veteran player with great experience and the skill set.”

Kang is one of the KBO’s best catchers, but he is also a strong batter. Joining the KBO with the Lotte Giants in 2004, Kang became a starting player just two years later, in 2006. Throughout his 14 seasons, Kang has a batting average of 0.277 with 218 home runs, 778 RBIs and 640 runs. In addition, Kang has a wealth of national team experience, having helped Korea win a gold medal at the 2008 Beijing Olympics, come second at the 2009 World Baseball Classic and bag gold at the 2010 and 2014 Asian Games.

This season, despite his age and a knee injury, Kang was dominant, playing the most number of innings among all of the starting catchers in the KBO.

Signing Kang also came as a surprise to the Lions.

“We thought Kang Min-ho was going to stay with the Giants,” said the Lions. “We asked if he intended to enter the FA market just in case. We met with him twice and within a week, our contract was finalized.”

In the past the Lions haven’t been very successful at signing FA players. Last season, the Lions signed two - Woo Kyun-min and Lee Won-seok - but failed to retain their own FA players, Cha Woo-chan, now with the LG Twins, and Choi Hyoung-woo, now with the Kia Tigers.

But this season, the addition of Kang and the return of Darin Ruf for another year at $1.5 million is expected to bring fans back to the floundering team.

Kang will also strengthen the Lions. Since Jin Gap-yong retired, the team has lacked a reliable catcher. Lee Ji-young stepped behind the plate, but he proved inconsistent.

“It was a difficult decision to leave the team that I’ve been playing with for more than ten years,” Kang said. “I’m truthfully thankful to the Lotte fans. I’ll never forget it.”

This is Kang’s second year as a free agent. When he first became a free agent in 2013, Kang stayed with the Giants, signing a four-year contract at 7.5 billion won.

BY PARK SO-YOUNG AND AN HEE-SOO [kang.yoorim@joongang.co.kr]