Korea will take a mix of veterans and youngsters to an upcoming regional women’s football tournament. 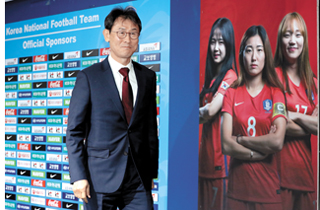 Yoon Duk-yeo, head coach of the Korean women’s national football team, at a press conference at the Korea Football Association headquarters in Seoul on Tuesday. [YONHAP]

Eight of the 23 players weren’t on the squad for South Korea’s October friendlies against the United States. The E-1 Football Championship isn’t on the official FIFA international calendar and European clubs, who will be in the middle of their seasons in December, aren’t obliged to release their international players.

On offense, South Korea will have to do with Yoo Young-a, the top scorer on the current squad with 32 goals in 84 matches. Other veterans include midfielder Cho So-hyun, team captain who has won 102 caps, and goalkeeper Kim Jeong-mi, who has played in 110 international matches.

Kim is one of the eight players who didn’t face the United States last month.

Yoon said Ji is such a huge part of the team’s offense that her absence will force major tactical adjustments.

“She is a difference maker, and we’ll have to come up with new strategies on offense without her,” the coach said. “We’ll need other players to step up.”

There are also three collegiate players, including Korea University forward Son Hwa-yeon, who has two goals in three international appearances.

The women’s edition of the E-1 Football Championship, formerly called the East Asian Cup, began in 2005. South Korea were the inaugural champions, but Japan won back-to-back titles in 2008 and 2010, and then North Korea claimed consecutive titles in 2013 and 2015.

South Korea will open the competition on Dec. 8 against Japan. They will then face North Korea on Dec. 11 and China on Dec. 15. All matches will be played at Fukuda Denshi Arena in Chiba, Japan.

Yoon coached South Korea to third place at this tournament in 2013 and then to second place in 2015. The coach said the progression may well take him to first place in 2017, but he admitted the task will be far from easy.

South Korea are the lowest-ranked nation in the tournament at No. 15. Japan are No. 8 in the latest FIFA rankings, followed by North Korea at No. 10 and China at No. 13.

“If we’re being realistic, we know it’s not going be an easy tournament,” Yoon said. “I think our first match against Japan will be crucial, and we’ll go all-in trying to win that match.”

South Korea have losing records against all three opponents. They’re 4-9-14 (wins-draws-losses) against Japan, 4-5-25 against China and 1-3-14 versus North Korea.

In their most recent showdown against North Korea in April this year, South Korea managed a 1-1 draw during the Asian Football Confederation (AFC) Women’s Asian Cup Group B qualifying tournament in Pyongyang.

“We always expect to have a tough match against North Korea, because they’re a physical team and they’ll run you into the ground,” Yoon said. “But since we’ve faced them often [recently], we know what to expect from them. I’ve never beaten North Korea and I’d love to get the upper hand this time.”