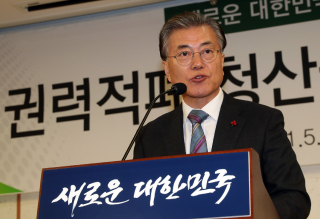 President Moon Jae-in, then the opposition leader, underscores the need to root out past ills committed by powerful agencies during a speech at the National Assembly in January. [JOONGANG PHOTO]

I experienced the 9-magnitude earthquake in Japan on March 11, 2011. The earthquake hit Tohoku two hours after I arrived there. A minute before the earthquake, I received a disaster alert on my phone, and 10 seconds later, the building began to shake and there was a loud banging noise. As I leaned on the desk and fell, my friend turned pale and started to scream.

The biggest fear was not the magnitude but the duration. The main shock continued for 190 seconds. After 30 seconds, I thought it was almost over. Two minutes into the earthquake, I wondered how long it would continue. After three minutes, I thought I might die.

The next morning at 4:30 a.m., a 6-magnitude aftershock added more fear. I was in a dark hotel room with no electricity, water or communication when the aftershock continued for four minutes. “I am dead,” I thought.

In contrast, the Hanshin earthquake in 1995 had a magnitude of 7.3, and the main quake lasted just 15 seconds. The one in Pohang last week lasted 10 seconds. The time to feel fear was relatively short. Japanese friends half-jokingly say that short and strong earthquakes are better. Fear is proportional to the duration of uncertainty.

Korean politics is not much different. The triangular earthquake emanating from the Blue House, the National Intelligence Service and the Prosecutors’ Office is shaking off the withered leaves of the Lee Myung-bak and Park Geun-hye administrations. It is the season of detentions. The scrutiny of previous administrations has become a backward rite of passage.

2000 years ago, the Chinese historian Sima Qian said, “Ten years’ time is not too long for an upright person to seek revenge.” Korea and China might be the only countries that still hold fast to this saying.

In the United States, new administrations also deny the legacy of the previous one, but with a different approach. Rather than punishment and retaliation, policy changes are implemented.

When Jimmy Carter became president in 1977, liberals asked him to punish Henry Kissinger, the secretary of state under the previous Republican administration, for ordering the secret bombing of Cambodia and regime change in Chile.

But Carter concluded after six months that continuing the controversy was not good for the nation. Now, President Donald Trump is also denying the legacy of Barack Obama through policy changes.

Six months into a new Korean administration, we should be reminded of more precious values. President Moon Jae-in has been advocating criminal justice reform, but that hasn’t been attained. Instead, prosecutors are focusing on ending past ills and brandishing swords more than ever to serve the current government. No one can control them. It is like putting the cart before the horse. Is this what the people and President Moon want from the prosecutors?

And what about the jobs that citizens are looking for? Youth unemployment is at its highest, but there are no feasible plans to fix the problem. And yes, it is up to the administration to detain former National Intelligence Service chiefs and security advisers for wrongdoing, but the first six months have been enough. As time goes on, the people will feel more tired and national crises will escalate.

Twenty years ago, as the government focused on correcting the vices of military rule, the economy had to plead for an IMF bailout. From my experience of the earthquake and the investigations of former administrations, not having them is the best, and even if we have to have them, it is better for them to be short and strong.