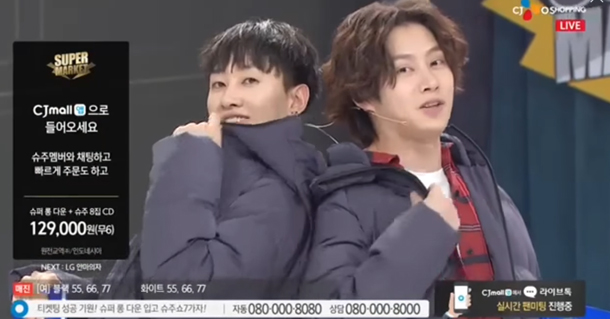 Home shopping channel CJ O Shopping featured boy band Super Junior as guest presenters on Monday evening and saw their ratings jump to as high as six times greater than its normal. Impressively, every product presented during their appearance on the network sold out.

During the program titled “Super Market,” which aired on Monday at 10:45 p.m., approximately 19,000 long padded coats from fashion brand Ce& were sold in 50 minutes.

Their appearance on the home shopping channel come about after a pledge the group made during a press preview for their eight album “Play,” which was released on Nov. 6.

At the press conference, the boy band’s members promised to appear on a home-shopping channel and sell black clothing if their album, which featured the song “Black Suit,” sold more than 200,000 copies. Member Lee Teuk was the main host of the program, while Shindong and Heechul took phone calls and messages. The other members of the group modeled the products being sold.