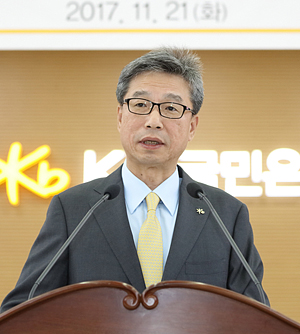 Hur Yin, the new president of KB Kookmin Bank, vowed to extend the bank’s operating hours and accelerate the digitalization of banking services on Tuesday.

During his inauguration ceremony, Hur said that KB Kookmin Bank won’t stick to the conventional 9 a.m. to 4 p.m. operating hours as clients are typically at work.

“We need to provide services whenever customers want,” he said, adding that the bank will expand its employee shift system so that a later shift can serve clients after they have finished work.

KB has been testing two group shifts - mornings and afternoons - at several branches that open until 7 p.m.

Still, the move will likely face some opposition as the labor union opposes the expanded hours due to fears of increasing workloads.

Another focus Hur outlined was embracing the digitalization of the bank’s services.

“The concept of digital banking is a central business strategy that we should succeed in,” Hur said.

The bank is working to replace traditional paperwork with digitalized forms using tablets and computers to negate the need for large amounts of documentation.

KB Kookmin Bank introduced tablets last month at three branches in Seoul and plans to expand the implementation across the country next year.

Under the new system, a customer only needs to sign once on the table-based document.

The model refers to financial institutions that provide a comprehensive set of financial products and services. The targeted areas include wealth management and corporate and investment banking, lines of business where financiers in Korea have struggled to gain momentum.

To strengthen the business areas, KB Financial Group decided to acquire Hyundai Securities two years ago and merged it with its brokerage affiliate.

Hur also raised the need to differentiate from one branch to another.

“We hope to make different strategies based on specific branch’s client base and demands,” he said, “We may need to change our approach on a branch-by-branch basis.”

KB Financial Group Chairman Yoon Jong-kyoo doubled as the banking unit’s head and group chairman from 2014, but shareholders decided to separate the position on Monday.

The shareholders’ meeting also passed a proposal to extend the Yoon’s tenure as chairman.