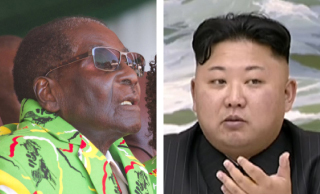 Later in the afternoon, a briefing was held by the Chinese foreign ministry. A reporter from a British newspaper asked the ministry to confirm the rumor that Zimbabwean Vice President Emmerson Mnangagwa had fled to China. As the question was thrown like a spear, foreign ministry spokesperson Geng Shuang defended with a shield. “As a friendly country to Zimbabwe, we are closely following the situation . . . As for the whereabouts of the vice president, I can assure you that he is not in China.” It was a refined answer.

Questions continued. “According to the website of China’s defense ministry, Gen. Constantine Guveya Chiwenga, commander of the Zimbabwe Defense Forces, was in China last Friday. Did he inform China of his plan?” Geng Shuang avoided answering and called the visit “a normal military exchange.” But he did not deny anything either.

Two days later, the questions continued. A reporter asked about China’s investment risk assessment on Zimbabwe, as a roundabout question on whether China had orchestrated the coup for economic reasons. Geng Shuang said, “China’s friendly policy towards Zimbabwe will not change. We stand ready to develop our friendly cooperation with Zimbabwe under the principle of equality, mutual benefit and win-win cooperation.”

CNN and other foreign media reported on China’s involvement in the coup. The Zimbabwean military claimed that it was an operation targeting criminals around the president. Grace Mugabe, who caused the crisis for attempting to inherit power from her husband, studied at Renmin University in Beijing. If China’s instigation is true, it would signal China’s approach to peacefully overhauling a government.

Could that approach be expected in the Korean Peninsula? The timing for Song Tao’s Pyongyang visit is interesting. Song Tao is one of the two key diplomats in Xi Jinping’s second term, along with Politburo member Yang Jiechi.

Kim Jong-un is different from Mugabe. He purged pro-Chinese uncle Jang Song-thaek and stood against Xi Jinping. The second round between Kim and Xi, who advocates new power diplomacy in the new era, has begun. Korea and the United States may want to take advantage of the discrepancy between North Korea and China rather than getting help from others.