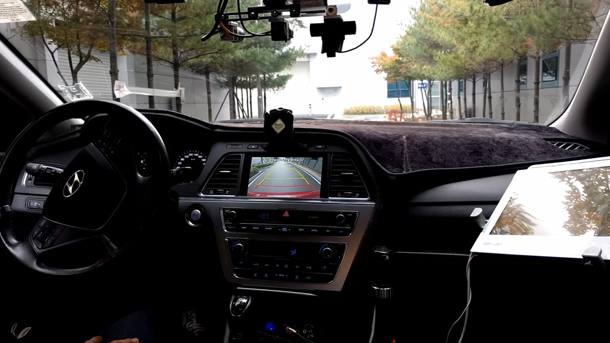 The view behind the wheel of a Hyundai Motor Genesis equipped with technology developed by Hyundai Mobis to back out of a driveway on its own. [HYUNDAI MOBIS]

Hyundai Mobis, Korea’s largest supplier of auto parts, has developed an assisted driving system that can operate in reverse to help drivers back out of dead ends and narrow roads.

The company said in a press release Tuesday that the system is the first in Korea to assist in reverse driving beyond just parallel parking. A driver using the system can navigate a car backward without having to touch the steering wheel.

“Many Korean roads are two-lane [one lane for each direction] or one-lane roads, which means, especially in the latter, you have to back out of the road when a vehicle comes from the opposite direction,” a company spokesperson said, “or sometimes, drivers have to drive backward to get out of narrow dead ends, and the new system is intended to help drivers out of such situations without a scratch on their vehicles.”

Kim Jeong-ku, a principal research engineer on the company’s driver assistance system control engineering team, said 70 percent of roads in Korea consist of such narrow streets, and the main beneficiaries of the system will be beginner drivers that find reserve driving difficult.

Hyundai Motor, the nation’s largest automaker and the parent company of Hyundai Mobis, has already equipped many of its models with systems that can control the steering wheel while on the road. Its highway driving assist system, which can be found in the luxury Genesis lineup, keeps the vehicle inside designated lanes while driving at high speeds.

“Most companies are developing autonomous driving technologies that focus on forward driving and because of this, most expensive sensors such as cameras, lidars and radars are all located at the front of vehicles,” the spokesperson said. “We had to make the [reverse driving assist] system possible without having to add such sensors to the back of the cars, which would incur more costs.”

The system is able to operate only with frontward-facing sensors by capturing data about the road, including road conditions, driving speed and turns, while the car is traveling forward. The data is then stored in the system and used as a reference when the driver puts the gear in reverse.

Hyundai Mobis said it has applied for three patents associated with this system.

Cho Seo-gu, director of driver assistance system development at Hyundai Mobis, said the company will focus on developing autonomous driving technologies that address other difficult road situations that drivers might face on a regular basis.