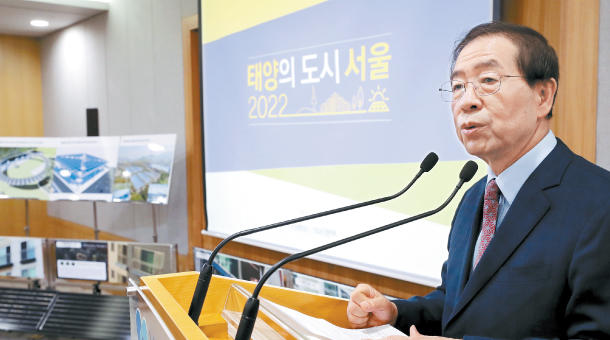 Seoul Mayor Park Won-soon briefs the press at City Hall in central Seoul on Tuesday on the Seoul Metropolitan Government’s plan to install solar panels at one million households, or in one household out of every three, in the city by 2022. [YONHAP]

The Seoul city government will inject 1.7 trillion won ($1.5 billion) until 2022 to ensure one out of three households in the city are equipped with solar panels, Seoul Mayor Park Won-soon announced Tuesday in his “2022 Solarcity Plan.”

“This Solarcity plan is a continuation of the city’s efforts to reduce reliance on nuclear power plants,” Park said in a press conference at the City Hall on Tuesday. “The plan is to ensure that one million households in Seoul are equipped with solar panels by 2022, which will generate 1 gigawatt of electricity altogether, equaling the capacity of one nuclear power plant.”

The city reduced 3.66 million TOE (tons of oil equivalent) of energy, which is comparable to the capacity of two nuclear power plants, or four fossil fuel power stations, in its “One Less Nuclear Power Plant” initiative since 2012. Seoul focused its efforts on replacing fluorescent lights with LED lights and renovating old boilers. Households installed with solar panels number 30,000 in Seoul today.

It is looking into mandating the installation of solar panels at newly built public apartments of Seoul Housing and Communities Corporation, a city-run company.

After the installation, the city expects to reduce some 540,000 tons of greenhouse gas emissions annually and generate enough energy to power 310,000 households, 9 percent of the total in Seoul.

The city government also outlined a plan to design locations in Seoul to be solar-energy friendly.

“We will name the street next to Gwanghwamun Plaza ‘Solar Street,’ equipping its lights, benches and even trash cans with solar panels,” said Hwang Bo-yeon, head of the Climate and Environment Headquarters of the Seoul city government. “We will renovate the World Cup Park into a solar energy park and create at least three new so-called energy-zero structures by 2022 that generate enough energy to run on their own.”