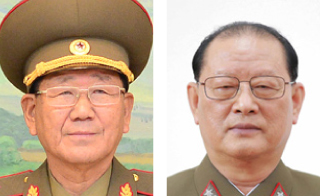 Pyongyang’s decision to punish two high-profile officials for their “impure attitudes,” tipped off by South Korea’s National Intelligence Service on Monday, suggests Kim Jong-un cannot stand another power circle within the regime and serves as a message that whoever disobeys him will not be handled with kid gloves, local analysts said.

North Korea has yet to mention anything about the fate of Hwang Pyong-so, director of the General Political Bureau of the Korean People’s Army, and Kim Won-hong, his deputy, and the South’s Ministry of Unification said Tuesday it could not confirm whether they were disciplined, let alone how, due to the classified nature of the information.

But if Kim Jong-un, who rose to power in December 2011 following his father’s death, did in fact penalize his top aides, it could be part of his continuous drive to remove anyone who shows signs of infidelity or accumulates power.

“After five years since taking the helm of state affairs, Kim Jong-un has managed to stabilize his regime to a certain degree,” said Koh Yu-hwan, professor of North Korean studies at Dongguk University.

Hwang and Kim Won-hong “could’ve committed some sort of a personal transgression, but the leader might also be trying to eliminate the frontline men of his father’s era in order to tighten his grip.”

Chon Hyun-joon, a visiting professor at the Department of Military Security at Woosuk University, said Kim Jong-un could be trying to play an old trick used by his father, Kim Jong-il, during North Korea’s epic famine of the late 1990s, known as the Arduous March, or the March of Suffering.

“North Korea has a way of executing top executives during difficult times, like in the late 1990s when it executed So Kwan-hee, agricultural secretary for the ruling Workers’ Party, during the Arduous March,” said Chon.

“It raises a sense of alarm among the general public. It’s a clarion call that any deviant behavior, from top to bottom, won’t ever be tolerated.”

According to South Korea’s spy agency, Kim Won-hong and Hwang Pyong-so were disciplined during a probe led by Choe Ryong-hae, vice chairman of the Central Committee of the Workers’ Party.

Commenting on this, a local government official said on the condition of anonymity that Kim Jong-un was trying to clamp down on powerful organs while keeping his hands “clean of anyone’s blood.”

The tactic can be traced back to 2013, when the young leader executed his own uncle and political mentor, Jang Song-thaek, then chief of the Central Administrative Department in the Workers’ Party.

The task was handled by the Ministry of State Security, which interrogated Jang, tried him in a special military tribunal and found him guilty of “anti-party, counter-revolutionary factional acts in a bid to overthrow the leadership of party and state and the socialist system.”