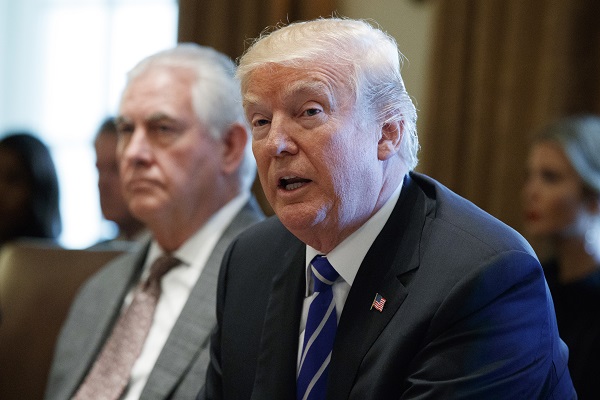 Secretary of State Rex Tillerson listens as President Donald Trump announces that the United States will designate North Korea a state sponsor of terrorism during a cabinet meeting at the White House, Monday, in Washington. [AP/YONHAP]

U.S. President Donald Trump Monday designated North Korea a state sponsor of terrorism nearly a decade after it was delisted, part of his campaign to exert maximum pressure on the regime to force it to denuclearize.

“Today, the United States is designating North Korea as a state sponsor of terrorism. It should have happened a long time ago,” said Trump at a Cabinet meeting. “In addition to threatening the world by nuclear devastation, North Korea has repeatedly supported acts of international terrorism, including assassinations on foreign soil.”

He was referring to the assassination of the North Korean leader Kim Jong-un’s estranged half-brother Kim Jong-nam in a Malaysian airport in February.

Trump also cited Otto Warmbier, the 22-year-old University of Virginia student who was arrested in North Korea last year and died after his June return to the United States without waking from a vegetative state, and “countless others so brutally affected by the North Korean oppression.”

He said that relisting the country “will impose further sanctions and penalties on North Korea and related persons, and supports our maximum pressure campaign to isolate the murderous regime.”

This latest move was seen as being symbolic as North Korea is already heavily sanctioned both through the United Nations Security Council and also under unilateral measures by many countries, particularly the United States.

The designation will put North Korea back on a list that currently includes three other countries: Iran, Sudan and Syria.
Listed countries are subjected to restrictions on U.S. foreign assistance, a ban on defense exports and sales, controls over exports of dual-use items and other financial restrictions.

The North was first designated a state sponsor of terrorism in 1988 after the bombing of a South’s Korean Air passenger flight the previous year that killed all 115 people aboard.

It was removed from Washington’s list in 2008 under the George W. Bush administration as Pyongyang agreed to move toward denuclearization.

Trump also declared that the U.S. Treasury Department will be announcing additional sanctions on North Korea over the course of the next two weeks, starting with “a very large one” Tuesday Washington time.

He continued, “It will be the highest level of sanctions by the time it's finished over a two-week period.”
Trump returned from a 12-day trip to Asia last week, during which a primary goal was “to pursue the denuclearization of the Korean Peninsula,” and he said the relisting of North Korea was a “critical step” toward that end.

"It is very symbolic, on the one hand,” U.S. Secretary of State Rex Tillerson in a press briefing acknowledged the same day. He added that the designation “makes a strong statement just on the nature of this regime,” pointing to its brutalities and disregard for human life.

Tillerson said that it may “dissuade some third parties from undertaking certain activities with North Korea, as it does impose prohibition on a number of other activities that may not be covered by existing sanctions.”

He added, "The practical effects may be limited, but hopefully we're closing off a few loopholes with this.”
North Korean leader Kim has not conducted any ballistic missile launches in over two months, and on this, the secretary said, “We’re hopeful that he continues this quiet period. That’s our objective, that he continues to be quiet as well.”

“We still hope for diplomacy,” said Tillerson, pointing out that tightening the pressure on Kim Jong-un’s regime is with the “intention to have him understand this is only going to get worse until you’re ready to come and talk.”

Diplomatic sources say there has been little progress between Washington and Pyongyang through their existing communication channels in the past two months, following Tillerson declaring that the United States has multiple direct lines of communication with the North in late September, during a visit to China.

Chinese President Xi Jinping’s special envoy to North Korea, Song Tao, who heads the International Liaison Department of the Communist Party of China, returned to Beijing after a four-day trip to Pyongyang apparently without meeting leader Kim. This could suggest limits to Beijing’s ability to further pressure the North.

But Tillerson denied that the United States is running out of diplomatic options in dealing with North Korea and added that the pressure is “having a significant effect” both based on anecdotal information and U.S. intelligence sources.

Tillerson added that there is evidence North Korea’s revenue streams are being blocked and that there are fuel shortages in the country.
He denied that China cutting off all oil shipments to North Korea would be a “magic wand that is going to bring [Pyongyang] to the table.”

He recalled Trump’s address to the South Korean National Assembly in Seoul two week ago and said, “I thought he laid out the case very well to them, that we wanted them to come have talks because he wants to deliver a different future to the people of North Korea.”

“What we’re focused on is a mission that’s going to change North Korea’s trajectory, change their path,” said Tillerson. “That the best way we can help the North Korean people in the future, is to have Kim Jong-un reverse his nuclear weapons program, allow us and the rest of the world to then engage with them in economic activity that will ultimately provide a better life for his people.”

Noh Kyu-duk, spokesman of the South Korean Ministry of Foreign Affairs, said in a press briefing Tuesday, “Our government sees the latest U.S. measure as a part of global efforts to bring North Korea toward the path of denuclearization through sanctions and pressure, and we look forward to it contributing to the peaceful resolution of the North Korea nuclear problem.”

He added, “As Secretary Tillerson mentioned, despite the designation as a state sponsor of terrorism, there is no change in the joint position between South Korea and the United States in its continued efforts to draw North Korea to the negotiation table.”

A Blue House senior official told reporters about the U.S. designation, “The issue was closely coordinated between South Korea and the United States and we plan to continue to do so.”