Park Sung-hyun wins Player of the Year in rookie season

Park Sung-hyun wins Player of the Year in rookie season 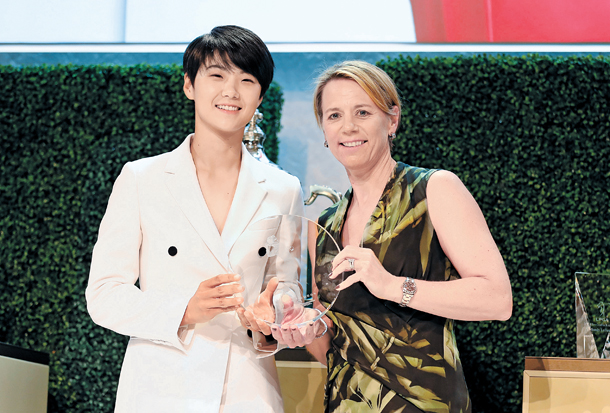 Park Sung-hyun, left, and Annika Sorenstam pose for a photo after Park received the Rookie of the Year award on Nov. 17. Sorenstam was the Rolex Player of the Year in 1998. [LPGA]

Park Sung-hyun may not have won all four titles on the LPGA Tour, but winning the Rolex Player of the Year award in her rookie season may be the biggest accomplishment of her career.

In 1998, Mark McGwire, who won the home run title, and Pak Se-ri, a rookie at the time, were chosen as Associated Press male and female Athlete of the Year. McGwire hit a total of 70 home runs and Pak won four tournaments, including two major tournaments.

Towards the end of the season, Park almost won the Vare Trophy, awarded to a player with the lowest scoring average, as well as the $1 million bonus by winning the Race to the CME Globe points standing.

But winning the Rolex Player of the Year award is more meaningful than the Vare Trophy or the million dollar bonus.

The Vare Trophy is similar to the batting title in baseball, where the result is affected by the pitcher, stadium or the statistics of other players. The batting title can still be won even without having the best batting average, but the Player of the Year award can only go to the best player in the league.

Sorenstam had the lowest scoring average in 2003 and 2004, but still wasn’t able to win the Vare Trophy. She did not win the award as she scheduled in less tournaments to focus on major events. To be eligible for the Vare Trophy, a player has to play in 70 rounds or more in a season.

On the PGA Tour, Tigers Woods also lost his chance of winning the Vardon Trophy, the award for the PGA Tour’s leader in scoring average throughout the season, for the same reason as Sorenstam.

It’s a must for a golfer to play well to win the award, but it also requires a little bit of luck. And Park had some luck this season, as Lexi Thompson missed her chance of winning the ANA Inspiration, receiving a four-shot penalty for incorrect ball placement, and the CME Tour Championship, by missing a two-foot par putt.

These mistakes have allowed Park and Ryu to win the Player of the Year award.

Park becoming the player of the year is meaningful since she did it as a rookie.

Even Michael Jordan and Tiger Woods weren’t able to do this. And in the Major League Baseball, only two players, Fred Lynn of the Boston Red Sox in 1975 and Suzuki Ichiro of the Seattle Mariners in 2001, have done it.

In the National Basketball Association, Wilt Chamberlain of the Los Angeles Lakers in 1960 and Wes Unseld of the Washington Wizards in 1968, did it.

In both the PGA and the LPGA Tour, Nancy Lopez was the only player to do it.

Lopez is still the only female golfer on the LPGA Tour to have won the Rookie of the Year, Player of the Year, Vare Trophy and the money title in the same season, in 1978.

She also won the Associated Press Female Athlete of the Year award that year.