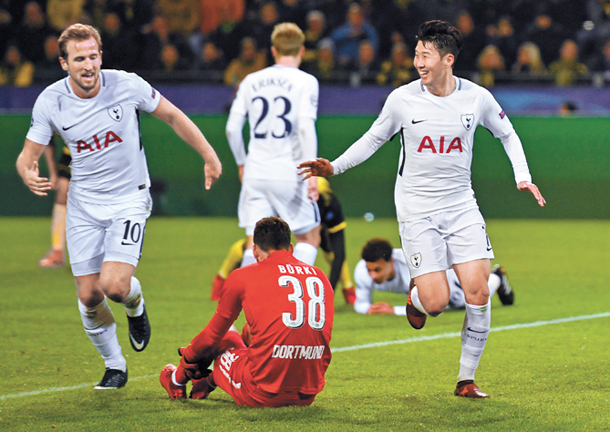 During the Spurs’ UEFA Champions League group match against Borussia Dortmund on Tuesday, Son Heung-min scored the winning point to lead Tottenham to a 2-1 victory over Dortmund. It was his eighth goal against Dortmund in 10 matches.

After the game, about 20 German reporters clambered to the mixed zone and asked, “Sonny, how and why do you score so many goals when you play against Dortmund?”

The Spurs’ head coach, Mauricio Pochettino, placed Son next to Harry Kane in a 3-5-2 formation. Dortmund scored the first point at the 31st minute, with Pierre-Eerick Aubameyang making the shot. Kane scored the equalizer in the 49th minute, and it was Son in the 76th minute who sealed the game for Hotspur.

“It was a difficult game, but we deserved to win,” Son was quoted as saying in a Hotspur Twitter post. “We showed how strong our mentality is. I’m very happy to score.”

Son has had a good record against Dortmund, scoring eight goals in 10 matches against the club, including during his time playing for Bayer Leverkusen and Hamburg. Most recently in September, Son scored his first Champions League goal of the season against Dortmund to help the Spurs to a 3-1 victory.

With a winner, Son received 8.3 points by whoscored.com, a football statistics website, the highest score Son received this season. This was Son’s fourth goal of the season, two scored in UEFA Champions League matches and two goals in the English Premier League matches.

Aside from Son’s achievements in the European league this season playing as a center forward, he has finally lived up to expectations for the Korean national football team, scoring two goals during a friendly match against Colombia on Nov. 10. This was the first time since 2015 that Son scored two goals in a match for the Korean men’s team.

“Everything was good - the mentality, the reaction, the way we played,” Coach Pochettino was quoted as saying on the Spurs’ website. “Of course, we were qualified but to be first in the group was so important for us. Now we have achieved that we can get ready for the weekend.”

The Spurs will return home for an English Premier League match against West Bromwich Albion FC at Wembley Stadium in London on Saturday.

In the EPL, Tottenham is currently ranked fourth with 23 points, which is 11 points behind the leader Manchester City.