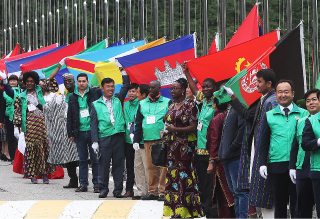 Forty-one members of the Global Saemaul Movement League celebrate the hoisting of their flags at the headquarters of the New Village Movement in Seongnam, Gyeonggi, on Oct. 12. [YONHAP]

According to a joke, there are three things that only Koreans don’t know: how dangerous a situation Korea faces; how powerful China and Japan are; and how prosperous Korea is.

One of the things that is admired abroad but taken for granted in Korea is the Saemaul Movement, also known as the New Village Movement. Many leaders in Africa and Southeast Asia are impressed by the modernization of rural communities in Korea. They are inspired by the idea of the late president Park Chung Hee. Ugandan President Yoweri Museveni keeps a book by Park and likes to refer to it. In Uganda, there are some thirty Saemaul Movement model villages and a leadership training facility. The country is promoting the Park Chung Hee-style economic development model.

Rwandan president Paul Kagame is also called an African Park Chung Hee. He openly says that he admires Park and former Singaporean Prime Minister Lee Kuan Yew and advocates the Saemaul Movement. In 2015, he said at a UN meeting that the economic development of Rwanda in the past decade was attributed to homegrown initiatives inspired by the Saemaul Movement. Rwanda was notorious for genocide in the past. But now it’s one of the fastest-growing economies in Africa with 8 percent average growth over the last ten years.

41 countries have adopted the movement, and it gives me a sense of wonder seeing foreigners working hard under the green Saemaul flags. Foreign leaders and ministers frequently visit the Saemaul Movement Center in Seongnam, Gyeonggi.

While the movement is admired abroad, it is underrated in Korea. Park was a dictator, and that shadow hangs over the Saemaul Movement. The current administration is strongly against dictatorial rule, and the movement naturally is not highlighted today. There was an attempt to cut the Saemaul-related budget by one third, which was prevented after some lawmakers complained.

Moon must have realized the value of the Saemaul Movement. He immediately directed that projects from the past administrations should be continued if they were successful.

When Former German Chancellor Helmut Kohl passed away in June, Moon posted on Facebook, “The Ostpolitik that began exchanges with East Germany was maintained after administration change, and Chancellor Kohl led Germany into reunification. His legacy is especially meaningful to Korea.”

Moon’s insight is correct. It is also noteworthy that Kohl had criticized Ostpolitik before taking office. His greatness was the flexibility to embrace a policy of the previous administration because it was right. Sometimes, good policies are scrapped simply because they were conceived by a past administration.

South Chungcheong Governor Ahn Hee-jung said during a primary in January that changing everything wasn’t wise and that he would continue “green growth” and “creative economy”policies from the Lee Myung-bak and Park Geun-hye administrations, respectively.
If Moon embraces policies from the previous administration, he can thaw the frozen hearts of his opponents. That would be the politics of tolerance.