Household debt still on the rise

Household debt still on the rise 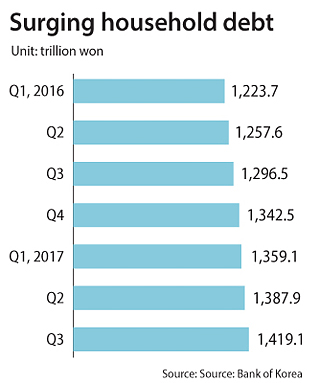 The country’s household debt levels show no sign of abating in the third quarter despite the government’s efforts to rein in mortgage lending and cool down the real estate market.

Outstanding household debt, which includes loans from banks and other financial institutions as well as credit-card spending, came to 1,419.1 trillion won ($1.3 trillion) in the third quarter, according to preliminary data from the Bank of Korea on Wednesday.

The latest level represents an increase of 2.2 percent, or 31.2 trillion won, compared to the previous quarter, the highest growth rate this year.

On a year-on-year basis, however, household debt, including credit-card spending, jumped 9.5 percent, which is the lowest in two years. The average growth rate of unpaid household debt hovered above the 11 percent range in 2015 and 2016. The central bank considers the growth rate to be especially fast considering the pace of household income.

“If we assume that this year’s growth rate of household income is near 3 percent, similar to the GDP increase, the expansion of household debt appears significant,” said Moon So-sang, head of the monetary & financial statistics team at the Bank of Korea.

The central bank noted that the rise recorded between July and September was fueled by an expansion of mortgages. The lending from banks rose 25 percent to 15 trillion won compared to the previous quarter. Of the increase, mortgages took up the majority share at 8 trillion won.

“Housing sales were active in July and August when the impact of government regulations on the housing market had yet to take shape,” Moon said, “And the apartment complexes that started building in 2015 received residents during that period, which led to the increase in mortgages.”

Back in August, the government found that all regions in Seoul, Gwacheon in Gyeonggi and the administrative city of Sejong showed too much speculative activity and labeled the regions overheated. In those places, the government made tougher loan-to-value (LTV) and debt-to-income (DTI) requirements for people applying for mortgages.

With the stricter requirements, borrowers are entitled to lower value loans. The loans from noncommercial lenders such as insurance companies, credit cooperatives and savings banks contributed to the increase in the debt level, but the third quarter saw the growth rate in this sector decline.