Farmers call on Korea to push back on U.S. FTA

Farmers call on Korea to push back on U.S. FTA 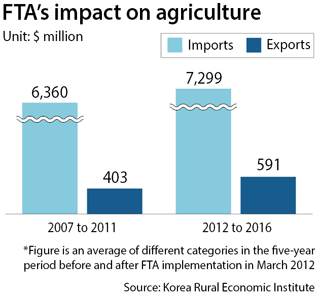 Korean farmers expressed concern about potential revisions to the Korea-U.S. free trade agreement during a meeting with government officials on Wednesday, arguing that opening up the market to American imports, especially beef and fruit, would harm the local industry.

The Ministry of Trade, Industry and Energy and Ministry of Agriculture, Food and Rural Affairs held a meeting at the Korea Agro-Fisheries and Food Trade Corporation’s headquarters in southern Seoul, where government officials and representatives from the agricultural industry discussed the impact of renegotiating the FTA.

The meeting came nearly two weeks after another one with representatives from several industries was disrupted by farmers who protested the FTA by lobbing eggs at officials.

That meeting continued with other industries, but the farmers were dragged out of the room.

This time, the deputy minister for trade, Kang Sung-chun, promised farmers that agriculture would be off the table in negotiations. But the farmers did not buy the assurance, calling for more protection if the United States demands Korea further open up its agricultural market.

Kim Hong-gil, president of the Hanwoo Association, which represents Korean cattle raisers, said that imports of American beef have been rising, but the government lacks necessary safeguards to protect farms from the damage, and that will force many of them to close.

Han Suk-ho, a researcher from the government-funded Korea Rural Economic Institute, pointed out that agricultural imports rose by more than 900 million won ($827,000) between 2007, five years before the FTA went into effect, and 2016.

Exports, on the other hand, went up by just 190 million won, causing the agricultural trade deficit between the United States and Korea to widen by 750 million won.

Im Jeong-bin, a professor of life sciences at Seoul National University, said overall trade in agriculture has increased between the two countries since the FTA was signed, raising the possibility that the sector might be put on the negotiating table as one of the more competitive industries.

The Korean Advanced Farmers Federation stressed that if agriculture is put on the table, the Korean government should push for revisions of “unfair clauses” and lower the standard for implementing safeguard measures.