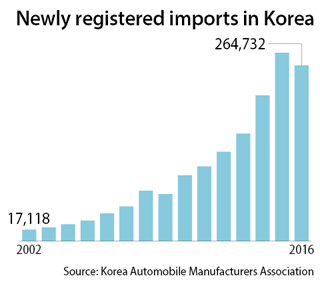 Locally-produced cars have been stuck in low gear in the past decade, while imported vehicles have been gaining ground in the Korean market, according to the latest report from a trade group representing Korean automakers.

The number of newly registered imports in Korea jumped more than 15 times between 2002 and 2016, from around 17,000 cars to 265,000, according to data from the Korea Automobile Manufacturers Association published late last month.

Given that leading foreign brands like Mercedes-Benz and Toyota have already outperformed their sales records from last year, analysts predict sales of foreign cars in Korea will likely to reach a historic high this year.

By country of origin, American imports have made the most gains among Korean consumers in the past few years.

The free trade agreement between Korea and the United States that went into effect in March 2012 lifted all import tariffs on American-made cars, making it easier for Korean consumers to access American brands.

Other than Germany and the United States, automobiles from Japan, the United Kingdom and Spain were among the most popular with Korean drivers.

As vehicles from all over the world have made their way onto Korean roads, local automakers have witnessed their share shrink from the early 2000’s.

Domestic sales of Korean models have gone down from 1.62 million in 2002 to 1.6 million in 2016, which means the rise in overall automobile sales in Korea during the same period was in fact led by foreign brands rather than homegrown players like Hyundai Motor and Kia Motors.

Experts cite a number of reasons behind the trend, including changing consumer perception of foreign brands.

“Customers these days prioritize individuality and taste when they choose a car,” said Lee Eun-jeong, a director at Mercedes-Benz Korea. “Foreign automakers have given more options for local consumers to choose from by adding more variety to available models.”

Another factor that has changed consumer sentiment is a decrease in the price of foreign cars, a result of various factors including the Korea-U.S. free trade agreement. Korean automakers have also been raising their prices in the past decade as part of a premium pricing strategy, bridging the price gap between Korean cars and foreign cars.

“It’s not that Korean vehicles are inferior compared to foreign cars in terms of performance, safety and fuel efficiency,” said Kim Pil-soo, an automotive engineering professor at Daelim University. “But when local brands had a complete monopoly over the domestic market, they built up negative brand images among local consumers due to unsatisfactory customer care and frequent labor strikes by a hard-line union.”