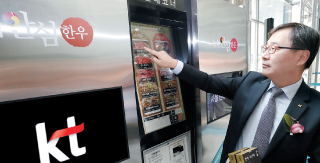 While the machines are currently tied to the stores, they will eventually be available at other locations and open day and night, according to KT.

KT and Nonghyup announced in a joint-statement Wednesday that the machine was developed to aid Korean farmers that have struggled due to the comparatively high price of Korean meat products.

Research from the Korea Rural Economic Institute suggests that Korean beef made up less than 40 percent of the total beef consumed in the country last year, the first time in 14 years the figure has fallen that low. This indicates that the consumption of imported beef has been increasing.

Selling meat through a vending machine eliminates much of the complicated retail process and manpower costs, allowing prices to be cut.

IoT technology from KT was added to the machine to keep temperature and humidity consistent so that packaged meats, either refrigerated or frozen, can be kept fresh. The technology will also monitor meat inventory levels and constantly update prices in line with actual market prices.

When customers consider a specific meat, details such as the date the product was delivered and where the meat was farmed will be displayed on the machines’ screen, a KT spokesperson said. Four machines were installed as of Wednesday including one at Nonghyup’s headquarters in Jung District, central Seoul. The machines will be tested until the end of this year. KT says 2,000 vending machines will be installed in the Seoul metropolitan area by 2020.

The machines will first target areas where single-person households are concentrated. Small Hanaro Marts in Seoul without a distinct meat-selling section will also bring in the vending machine sooner than other branches.

KT also installed its smart payment system in the machines, allowing customers to use credit cards, membership points and mobile payment schemes to purchase the meat.

“We will actively cooperate with Nonghyup to expand the use of IoT-based smart vending machines catering to the needs of single-person households and dual-earner households,” said Lee Mun-whan, senior executive vice president of the enterprise business group at KT.