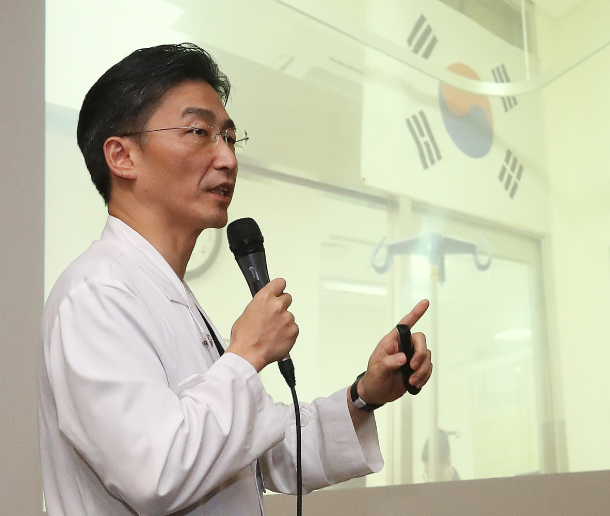 Dr. Lee Cook-jong of the Trauma and Acute Care Surgery Department in the Ajou University Medical Center on Wednesday holds a press briefing announcing that the soldier regained his consciousness. [YONHAP]

The North Korean soldier who was shot at least four times by his fellow officers while defecting to the South through the Joint Security Area (JSA) last week has regained consciousness but needs about a month to perfectly recover, a South Korean doctor who is treating him in Suwon, Gyeonggi, said Wednesday.

Dr. Lee Cook-jong of the Trauma and Acute Care Surgery Department in the Ajou University Medical Center stressed in his second press briefing to local reporters that the soldier “will not die.”

A week before, during his first briefing, the surgeon had said his patient was in “critical condition,” which required Lee and his team to be on high alert.

The North Korean defector, identified as a 25-year-old army soldier surnamed Oh, is known to have sustained five wounds to his shoulder, abdomen and elbow - with one of the four bullets possibly creating two separate wounds. Some 40 rounds were fired at him on Nov. 13 by North Korean border guards, who pursued him as he crossed the Military Demarcation Line in the JSA.

“He’s sustained gun shot wounds and went through two big surgeries, so he’s under a lot of stress and showing signs of depression,” said Lee. “We’re planning to ask the psychiatry department to run a post-traumatic stress disorder test on him.”

Oh will remain at the intensive care unit for at least several more days, Lee said, and may be transferred to a general ward by this weekend at the earliest. Ajou University Medical Center will then discuss with local authorities whether to move Oh to a military hospital. The most urgent task remaining is to fix his enterostenosis, or the abnormal narrowing of his intestine, which was caused by a bullet that penetrated the organ.

Several government officials told the JoongAng Ilbo that Oh regained consciousness Monday morning. When doctors tried to talk to him, he blinked his eyes in response, but could not speak at the time. Oh began talking Tuesday, a government source said, when he suddenly cried, “Oh, it hurts!”

It remains unclear precisely what rank Oh held in North Korea, but the South’s National Intelligence Service told the parliamentary Intelligence Committee last week that it appeared he used to work in the JSA as a staff sergeant, given the uniform he was wearing when he defected.

Pyongyang has not made any remarks on the case yet.

During his first briefing to the press, Lee said an “incredible amount of parasites,” including roundworms, was found in Oh’s stomach, something he and his team have “never seen” in a Korean person before, which was complicating surgeries.

The comment faced backlash from some critics, who accused Lee of violating medical ethics rules, which prohibit doctors from disclosing their patients’ personal medical information.

Lee said Wednesday he had negotiated the entire process with the South Korean military and exposed only what the government had allowed, adding the general public also had the right to know about Oh’s conditions.