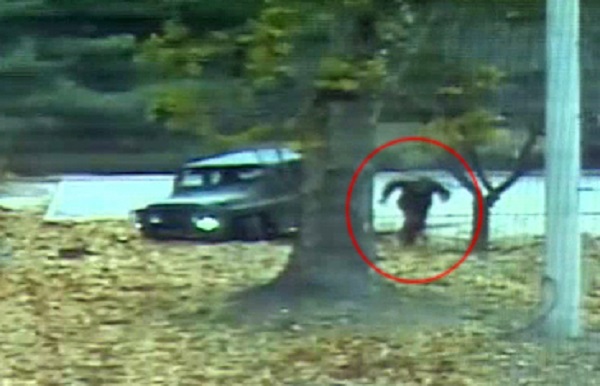 A North Korean soldier runs toward South Korea after exiting a jeep at the truce village of Panmunjom in a video clip released by the United Nations Command on Wednesday. [YONHAP]

North Korea violated the United Nations Armistice Agreement twice last week by firing weapons across the Military Demarcation Line (MDL) inside the Joint Security Area (JSA) and when one of its soldiers temporarily crossed the line while pursuing a fellow solider defecting to South Korea, the United Nations Command (UNC) concluded Wednesday.

Dramatic CCTV footage of the Nov. 13 defection, revealed by the UNC to South Korean reporters Wednesday, showed a North Korean army solider speeding across the 72-hour Bridge in a vehicle until it got stuck at a row of JSA buildings.

North Korean border guards were seen dashing towards the vehicle, after the defector got out and ran south across the MDL. The guards engaged him with direct fire. One guard briefly crossed the MDL, hesitating as if realizing where he was, and then returned back to the north side of the JSA.

Some 40 rounds were shot at him by the pursuing guards.
"UNC personnel at the JSA notified the Korean People's Army [North Korean army] of these violations today through normal communications channel in Panmunjom and requested a meeting to discuss the investigation results and measures to prevent future such violations," the U.S. Army Garrison Yongsan said in a statement.

While revealing more CCTV footage showing the UNC Security Battalion's recovery of the defector as he leaned against a tree on South Korea's side, the investigation team said the battalion had taken "appropriate" actions that resulted in de-escalation of tensions and no loss of life.

The defector was retrieved by three South Korean soldiers – Kwon Young-hwan, deputy commander of the UNC Security Battalion-JSA, and two noncommissioned officers – and evacuated by helicopter to the Ajou University Medical Center in Suwon, Gyeonggi, for treatment.

"The armistice agreement was challenged, but it remains in place," said Gen. Vincent K. Brooks, commander of the UNC, U.S. Forces Korea and the ROK-U.S. Combined Forces Command.

The UNC special investigation team was comprised of personnel from the United States, South Korea, Australia and New Zealand, while members of the Neutral Nations Supervisory Commission from Sweden and Switzerland observed the process in accordance with standard procedures for those types of investigations.

North Korea has yet to respond to the probe outcome, nor has it mentioned anything about its defector.
Pyongyang withdrew from the UNC Military Armistice Commission in April 1994 and declared the Armistice Agreement defunct in March 2013, which leaves little hope it will take the investigation results seriously.

Without any direct communication channels between the two Koreas in the JSA, a source from the UNC said an official from the UNC Military Armistice Commission had approached the MDL Wednesday at 9:30 a.m. and read out its statement notifying North Korea about its recent violations of the Armistice Agreement.

North Korean soldiers recorded the scene with a camcorder, the UNC source said.
The North severed all channels of dialogue with the South after Seoul shut down the jointly-run Kaesong Industrial Complex in February 2016, which came in response to Pyongyang's fourth nuclear test that January and a subsequent long-range ballistic missile launch.