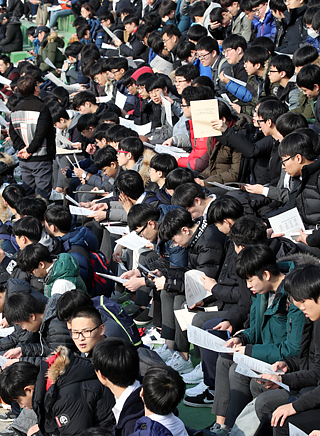 Seniors at Pohang High School on Wednesday attend an orientation for the College Scholastic Ability Test (CSAT), which was rescheduled for today after a large quake hit the city on Nov. 15. [YONHAP]

Twelve Pohang test centers in North Gyeongsang have been equipped with seismic monitoring devices to help exam supervisors and education officials determine whether to evacuate students. “The Pukyong National University’s Institute of Environmental Geosciences operates the earthquake detectors,” explained one Gyeongsangbuk-do Office of Education (GBE) official. “The Pohang Office of Education will have access to the information real-time and monitor the situation comprehensively on test day.” The devices will be hidden away in corners of the test centers to avoid alarming students.

On Monday, the Ministry of Education announced “the exam supervisors and principals will be the ‘first decision-makers’” when it comes to deciding whether to evacuate students. Though staff members have been authorized to pause the exams and evacuate students if they assess an earthquake to be dangerous, there are fears that they are not qualified to make such judgements. The education ministry has not provided detailed guidelines on when to resume tests once interrupted.

To allow students to take their exams in the most normal environment possible, the GBE declined one Busan company’s offer to equip Pohang students and staff with 5,500 safety helmets. The GBE also decided not to tape classroom windows with film that would help minimize earthquake damage.

There are, however, a total of 244 buses parked outside Pohang test centers in case students have to move. Twelve school buildings in North Gyeongsang cities, including Yeongcheon and Gyeongsan, have been designated as reserve test centers. Working hours for office workers in several North Gyeongsang cities will be pushed to 11 a.m. to prevent traffic in case students have to move, and police cars are ready to escort them. Police have also been stationed at 22 of the busiest intersections in Pohang to regulate traffic.

Each Pohang test center will have rescue workers, fire fighters and medical staff, including a mental health therapist from university hospitals. Public officials are also staying near the centers to respond to unexpected situations. Two fire fighters are on standby at test centers in the rest of the country.