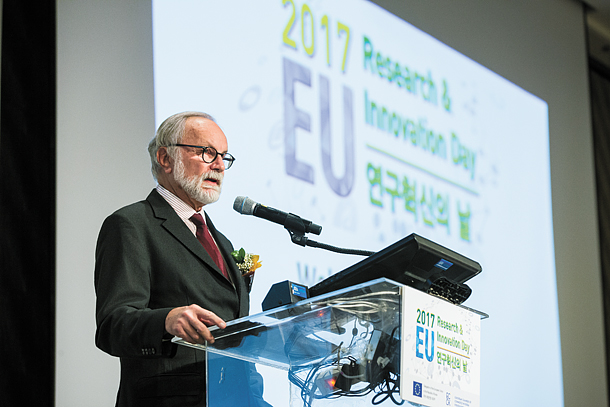 Michael Reiterer, the ambassador of the delegation of the European Union to the Republic of Korea, during an opening remark at a conference on Thursday titled “2017 EU Reserach and Innovation Day.” The conference focused on how the EU and Korean governments, as well as European and Korean companies, could work together for technogical advances that could solve various issues such as climate change. [EUROPEAN CHAMBER OF COMMERCE IN KOREA]

The European Union’s ambassador to Korea called on governments and companies in both markets to cooperate on solve pressing environmental issues during a technology conference hosted by the European Chamber of Commerce in Korea and the EU delegation in Korea on Thursday.

“While Europe is recognized for its capability in research and innovation, Korean companies have the edge in turning innovation into operational application,” Michael Reiterer told the crowd gathered at the Four Seasons Hotel in central Seoul. “This makes EU and Korea ideal partners.”

During the conference titled “2017 EU Research and Innovation Day,” Reiterer stressed the need for the public and private sector to work together on addressing climate change through technological innovation, as the Korean government has become increasingly interested in eco-friendly technologies, including electric cars and renewable energy sources.

The current Moon Jae-in administration has set a goal of getting 350,000 electric vehicles on Korean roads by the end of the president’s term in 2022. Moon is also pushing to lower the country’s heavy reliance on fossil fuels and nuclear power in favor of renewable sources.

The public appears to share the sentiment. In a recent survey, about 53 percent of respondents said Korea should reduce its reliance on nuclear power.

“We believe the core function of today’s event is to share knowledge and connect like-minded people,” said Dimitris Psillakis, chairman of the chamber of commerce and president and CEO of Mercedes-Benz Korea. “To create a sustainable future, innovation is crucial, and technologies and players must be connected across industry, exchanging information and collaborate.”

According to Kim Myung-ja, president of the Korean Federation of Science and Technology Societies and former environment minister, the risks associated with energy and the environment could be a new business opportunity for companies worldwide.

“In 2015, natural disasters, which have been occurring more steadily with climate change, incurred economic damage worth $66.5 billion,” Kim said. “As we look for approaches to resolve such issues, we are seeing new market and business opportunities in various industries such as mobility, health care and clean energy.

“We need technological innovation along with new opportunities,” Kim added.

Innovation, once made, must be commercialized, according to participants of the event.

Michael Arentoft, a senior policy officer at the European Commission, an EU institution in charge of policy proposals and implementing decisions by the EU, explained that the commission sees Korea as an ideal partner, not only because of the technological edge that Korean companies have, but also because of the commitment shown by their government.

“The Korean government recently signed up to double its public funding in clean energy research,” Arentoft said. “This sends a signal to researchers and project managers in Europe that it is good to team up with Koreans because nationally, there is a good level of funding.”

Arentoft said the EU recently committed 30 billion euros ($35 million) to fund research and innovation projects in various fields that include not only renewable energy, but also information and communication technologies and automobiles, many of which he said Korea is seen as a key strategic partner.

“As the electrification of vehicles is becoming the trend in the automotive industry, Korea will have an immense opportunity as it is one of the top players when it comes to battery technologies,” Prakash Raman, senior vice president of Solvay, a Belgian battery and chemical company, said in an interview with the Korea JoongAng Daily.

Raman, however, said that Korean government must be careful when it comes to related legislation.

“We expect the government to come up with regulation that pushes for innovation but also regulates the pace of growth because if the industry grows in such a fast pace that infrastructure supply cannot keep up with it, then it would create a negative experience for consumers,” Raman said. “Another critical thing is making sure the safety of consumers when new technologies and innovations are made. Lithium ion batteries, for instance, are safe if operated in designed parameters, but if something happens beyond the control of normal operation, it could lead to safety issues.”

“When it comes to infrastructure, policymakers must encourage a complete and holistic system where different government departments are linked with researchers so that new technologies can go along with infrastructure establishment, which requires new regulations and policies,” Arentoft said. “Researchers can be inventive as they want, but if the new technology doesn’t fit with the infrastructure, it’s not complete. It’s crucial for technologies and innovations to thrive and become practical at the same time, and this is what European Commission is pushing for.”

Ambassador Reiterer called on the Korean government to create a fair working environment for European companies in Korea and vice versa.

“Our message is that we are opening Europe for business and for Korea, as attested by the functioning free trade agreement between EU and Korea that’s in its sixth year,” Reiterer said. “Europe is open for business, but we also would like to make sure that European businesses working here in Korea can work in a friendly environment, without discrimination between European companies and Korean companies and that they are treated the same way when it comes to the application of law and regulation and facilitation of imports and immigration.”

Demistris, who represents ECCK as well as Merdeces-Benz’s local unit, also requested that Korean government to not only support and sponsor innovation, but also, work with the EU to align legislation and regulations together so that companies of Korea and EU operating in each other’s’ market could innovate and operate while saving bureaucratic effort.