Planning for the hardest goodbye : Director Cho Young-jun’s ‘The Preparation’ gives an honest look at a mother and her disabled son

Planning for the hardest goodbye : Director Cho Young-jun’s ‘The Preparation’ gives an honest look at a mother and her disabled son 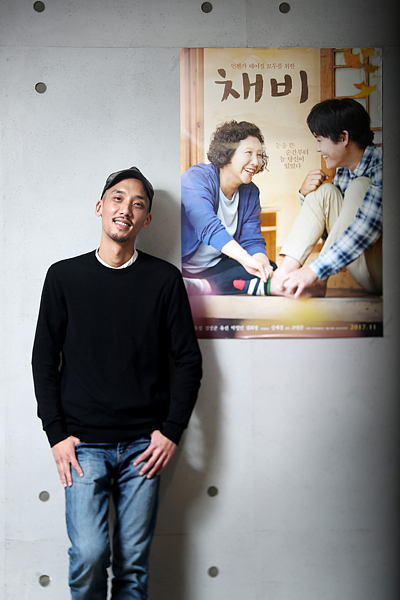 Just over two weeks ago, “The Preparation” hit theaters and since then, over 120,000 people have seen the touching story of a loving mother and her disabled son.

Directed by Cho Young-jun, a rookie auteur, the movie depicts the relationship between Ae-soon, played by Go Doo-shim, and her 30-year-old son In-gyu, played by Kim Sung-gyun, who has developmental disabilities. Ae-soon must watch over her son 24/7, since he is unable to feed himself a meal without the help of his mother. But she faces the reality that she must leave her child one day. The 114-minute flick follows the story of the mother and her son, as she prepares her child for a life without her.

Even though the movie is a drama, it is not heavy-handed in its use of dramatic devices to pull the audience into the story and does not try to elicit a reaction any more than is necessary. The movie revolves around the emotions and struggles the two face in their ordinary lives, without the help of unnecessary scenes to spice things up. This may be director Cho’s first time to helm a major motion picture, but he has managed to prove himself a power auteur with his ability to lead the film with restraint.

“I didn’t want to overwhelm the audience with sadness,” said Cho at an interview with the JoongAng Ilbo, an affiliate of the Korea JoongAng Daily. “I took out the scenes that [I thought] could be too sad during the editing process.”

The 37-year-old filmmaker first had the idea for the movie when he watched a TV documentary on the life of an 80-year-old janitor and her 50-year-old disabled son. “I saw the mother say in the documentary, that she wanted to die in the same day as her child. Then I thought, ‘What will happen to her son?’”

The creative process of the movie followed afterwards, and the director searched around for disabled families and facilities, listening to their stories to learn more about their lives. The more he looked into it, the more he found out that Korea was lacking the social backing for disabled persons and the protective measures for those left on their own after their guardians pass away.

Every single step he had to take while creating the movie was an ordeal, from research to writing the script and getting investors. Others tried to stop him from going forward with the movie saying, “You won’t find an actor willing to play a disabled person,” or “This will never make it to release.” But at the end of the day, Cho found an investor, whom he thanks for granting him all the decision making power without getting involved in the script or the filming, even though Cho is a rookie. “The whole process just feels like a miracle, really,” said Cho. 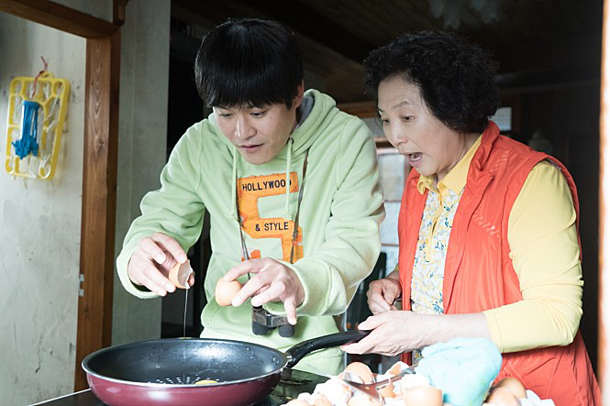 “The Preparation” illustrates the last days of Ae-soon as she prepares her disabled son In-gyu for their imminent goodbye. [SCREEN CAPTURE]

Q. What program was it that gave you the idea for this movie?

A. It was an episode of “Capture the Moment, How is That Possible?” on SBS that I watched in 2013. I cried so much watching it. It was about an 80-year-old janitor whose 50-year-old son is incapable of doing anything without her. While she cleans the corridors of apartment buildings, her son sits at the top floor of the same building, playing with puzzles while waiting for his mother to finish.

At the end of the episode was a video that she shot for her son, saying, “Living with you, there was never a boring moment in my life, every day was fun and I was happy. You’re like an angel sent to me from the heavens.” I used this as a line in my movie, because it was such a big shock to me. From then, I wanted to make a movie that could console the hearts of the many mothers like her there must be in the world.

Was there anything else that influenced you?

A few months before watching the documentary, I was working on the PR team of a district office in Seoul, where I had the chance to visit some facilities for disabled people in rural areas. There, I came to my decision to make a movie. Some things I saw there shocked me, which I tried to convey in Ae-soon’s search for a place to take care of her son.

What did you have in mind when you were writing the script?

My biggest goal was to not make fun of disabled people nor show only the good sides of them. The idea of putting a disabled person in a film required much care and I was really nervous. People around me warned me that even if I approach it as sincerely as possible, others may still point fingers. So in the editing process, I actually took out all the scenes that seemed funnier or sadder [than necessary].

To make a movie more pleasurable to the senses, it’s often the case that directors resort to a rather sadistic method in filming. You make more conflicts and hardships, and you put in a bad guy to make the life of the protagonist harder. But in my movie, In-gyu already had a disability, and the mother, Ae-soon, was already facing a limited amount of time she had to fight against her death. I didn’t want to make their struggle harder than it already was.

How was working with the actors Go Doo-shim and Kim Sung-gyun?

I really can’t thank them enough. Go Doo-shim asked me if it was okay for me, a rookie, to be shooting something like this, when there are so many “powerful” movies out there that kill people and break everything. Kim Sung-gyun contacted me saying, “My wife cried her eyes out after she read the script.” He watched so many videos about disabled people and studied them. I owe them so much.

Did you cry while you were shooting the movie?

Yes I did. There was a scene where Ae-soon takes In-gyu to a funeral of her friend, and she says, “In-gyu, mom’s going to die too.” I had to give them the okay sign, but I almost choked. Afterwards, Go told me I was really silly (laughs). But as I found later, it turned out that everyone, including the script writers and editors, had cried.

The movie is a story about a mother and her disabled son, but every parent and child must say goodbye at one point in their lives. Is that the message you wanted to get across?

That’s exactly the story I wanted to tell. We all have to prepare ourselves for the goodbye in our lives. The mother Ae-soon is actually the name of my mother, and the name of the sister in the movie, Moon-kyeong, is the name of my sister. I put myself in In-gyu’s shoes. My mother told me something after she watched the movie, and it really sank deep into my heart. “Goodbyes are sad for everyone, but the best way to prepare for it is through love.”