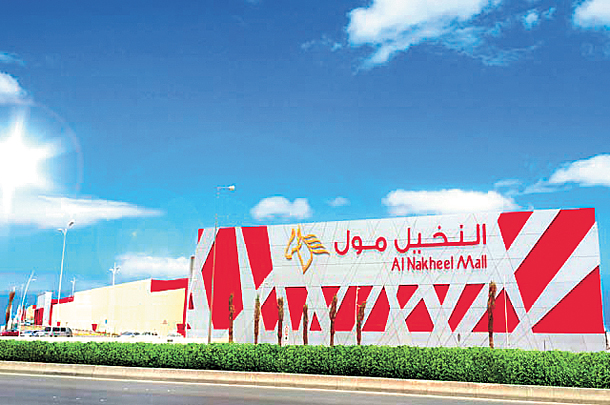 The Al Nakheel Mall in Riyadh, Saudi Arabia, where Emart’s cosmetics brand Sentence will be on sale next year. [EMART]

Emart’s cosmetic brand Scentence is set to open in Saudi Arabia next year, according to the company Thursday.

Emart signed a franchise agreement with property giant Fawaz Alhokair to allow them to operate Scentence stores in Saudi Arabia. The plan is to open six branches next year, starting with two in Jeddah, a gateway city to Mecca, and the country‘s capital, Riyadh, both scheduled to open in March at the earliest.

The deal makes Scentence Emart’s first “specialty store” to set foot abroad. For the last few years, Emart has launched retailers that focus on a particular concept or product sector from electronics and toys to lifestyle goods. The stores were deemed a future growth engine that would help compensate for slow sales in the discount chain business which has steadily declined since the 2000s.

Launched last year, Scentence sells skin and body care products with a focus on scent. Each scent is made into around 150 products including shampoo, body lotion and perfume. All items sold are collaborations between Emart and cosmetics manufacturers Kolmar Korea and Comax, both renowned suppliers for global beauty brands.

When Emart and Fawaz Alhokair first signed a memorandum of understanding in June, the Saudi retailer planned to take Sugar Cup, another cosmetics store under Emart with a concept similar to Sephora. The decision was altered after a team from Fawaz Alhokair came to visit the stores in Korea.

“Fawaz Alhokair judged that Scentence would have a more competitive edge in the Saudi market in terms of price and concept,” said Emart.

The Middle East is a rising market for global beauty brands for its growth potential and relatively small pool of local manufacturers. Korean companies are also eyeing possibilities in the region, particularly while Korea’s relations with China soured this year due to the installment of a U.S.-led anti-missile system.

The Korea Trade Investment Agency pinpointed the region’s cosmetics sector as one of the most lucrative fields for export, projecting a 6.4 percent annual growth rate until 2020 - double the predicted expansion rate of the global beauty market during the same period.